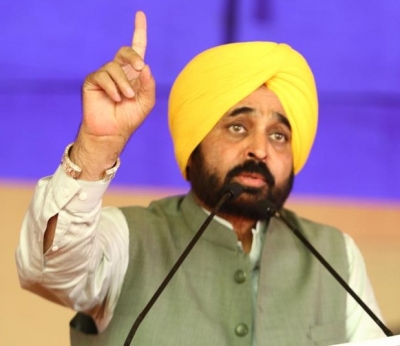 Panchmahal (Gujarat):  Punjab Chief Minister Bhagwant Mann on Friday asserted that people of Gujarat will usher a new era of politics by collapsing the political fortress of the BJP, which has been in power for the past 27 years, and ensuing a landslide victory of Aam Aadmi Party (AAP) party in the upcoming assembly elections.

Addressing to a gathering here, Mann said it is crystal clear that the people of Gujarat have made up their mind to give mandate in favour of AAP by ousting the BJP from the power.

He said the Opposition is trying to malign AAP by dubbing it ‘B’ team of others but AAP is party of Gujarat’s people and 130 crore of Indians.

“AAP is spearheading to make India number one by cleaning the decade-old filth in the system with their honest and pro-people approach.”

Slamming the BJP for the miserable condition of common man in the state, Mann said the saffron party is responsible for plundering the wealth of the people.

“The people were deprived of basic facilities like education and health. But now people are ready to teach a lesson to the BJP in the upcoming assembly elections,” he said.

Referring to the massive wave of change in favour of AAP in Gujarat, the Punjab Chief Minister said repeating the history of Delhi and Punjab, the common people of Gujarat will form the government of AAP with a landslide margin.

The Chief Minister said the huge crowd in rallies was a testimony to fact that AAP will form government in Gujarat. He said the BJP has been baffled by massive response to the party in the state.

Reiterating that AAP will eliminate corruption from the system after forming the government in the state, Mann said foreigners ruled Indian for over 200 years but they would have also felt ashamed to witness that they could not match the loot what the ruling leaders are doing currently in the country.

Taking potshots at the Congress for its MLAs shifting loyalty to the BJP, Mann said the Congress is not change but they are for exchange only. Their MLAs are ready to join other parties as they know ship of the Congress is sinking in the country.

The Chief Minister said at present the country is on the brink of political change and people are looking beyond traditional the Congress and the BJP parties. Earlier, there was no alternative to people but now they have an honest AAP party led by its soldier Arvind Kejriwal.

He said that just like Delhi and Punjab, the wind of change is prevailing in this state too.

Talking about the pro-people policies initiated by the Punjab government, the Chief Minister said that the state has restored the old pension scheme for its employees, which was discontinued in 2004.

Apart from this, six per cent dearness allowance has been given to the employees so that they can be protected from the incessantly rising inflation.