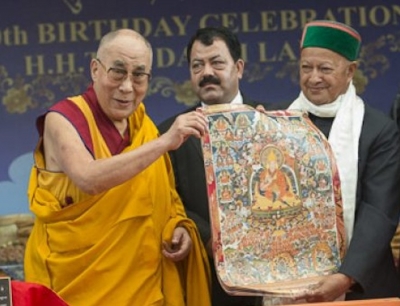 Dharamsala: Tibetan spiritual leader, the Dalai Lama on Thursday condoled the demise of Congress veteran and six-time Himachal Pradesh chief minister Virbhadra Singh, saying he was personally grateful for the warm friendship he showed to him.

In a letter to his widow, Pratibha Singh, the Dalai Lama wrote: “Dedicating himself to the service of others, Virbhadra Singh led a long and meaningful life. I admired the way he listened to people’s needs with deep affection and compassion.

“I am personally grateful for the warm friendship he showed me over the many years we knew each other.

“Historically there have long been close ties between the people of the erstwhile princely state of Bushahr, to which ‘Raja Sahib’ belonged, and their neighbours in western Tibet.

His Holiness concluded his letter, “With my prayers.”

Virbhadra Singh passed away early Thursday at the Indira Gandhi Medical College and Hospital (IGMCH) in Shimla after a two-month long battle with post-Covid complications. He was 87.