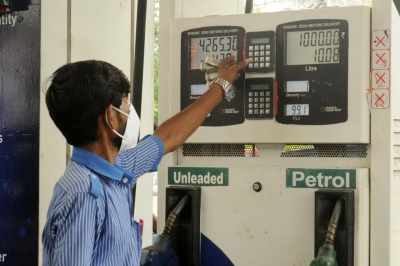 However, unlike uniform price movement earlier, oil marketing companies on Thursday continued with their practice adopted more than two months back to increase the price of petrol a tad higher than diesel offering some relief to the transport sector.

Before Thursday, oil marketing companies had kept fuel prices unchanged for the past couple of days to get a sense of evolving global oil prices after news of two giant oil producers Saudi Arabia and UAE reaching some sort of agreement on production of oil by OPEC.

In the city of Mumbai, where petrol prices crossed Rs 100-mark for the first time ever on May 29, the fuel price reached a new high of Rs 107.54 per litre on Monday. Diesel price in the city is also at Rs 97.45, the highest among metros.

Petrol prices in all metros have now crossed Rs 100 per litre-mark and OMC officials said if the international oil prices continue to firm up, prices may rise further.

Consumers can now only expect that any further raise in fuel price is checked as OMCs start cutting the retail price of petrol and diesel over the next few days to provide relief. But with crude still around $75 a barrel mark in wake of falling US inventories and rising demand, the next action of OMCs would be awaited.