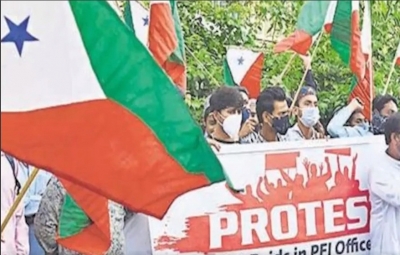 Chennai: After the Union Home Ministry imposed a ban for five years on the Popular Front of India (PFI) on Wednesday, several leaders and cadres of the organisation have gone into hiding.

Sources in the state police told IANS that many of the leaders and cadres who were present in public after the September 22 raids and arrest of senior leaders by the NIA are now not seen in public.

Tamil Nadu state president of the PFI, Mohammed Shaik Ansari in a statement after the ban said that the organisation would fight the ban legally. The state leader also termed the ban “illegal and undemocratic”.

While the state president has put a bold face by issuing a statement, almost all the other leaders of the front are not being seen in public.

Sources in the Tamil Nadu police told IANS that some PFI leaders who were arrested from the state on September 22 were taken to Delhi and most of the second rung leaders fear that they may also be taken to the national capital and hence many of them have gone into hiding.

With the ban coming into effect, the leaders are not certain what the future will be if arrested and hence most of them have not appeared outside.

In the protest held by the Popular Front at the communally sensitive Ukkadam in Coimbatore this morning, almost all the participants were women.

Sources in the central agencies told IANS that the activities of the organisation are being monitored and if any leader or cadre is found indulging in activities of PFI, then they would be brought before the law of the land.

Dr M. Surulinathan, Retired Professor of Sociology from a private college in Madurai while speaking to IANS said, ” The ban on the organisation has been apt as Popular Front was involved in several subservient activities and have misused the holy Quran and the Hadees teachings for their end. If Popular Front of India is allowed to function, then it would mean dividing the Tamil society into two.”

The bank accounts of the organisation have been frozen and almost all the PFI offices are sealed in Tamil Nadu.

Notably, 11 Popular Front of India leaders of Tamil Nadu, including its National Executive member, A.M. Ismail has been arrested by the NIA.