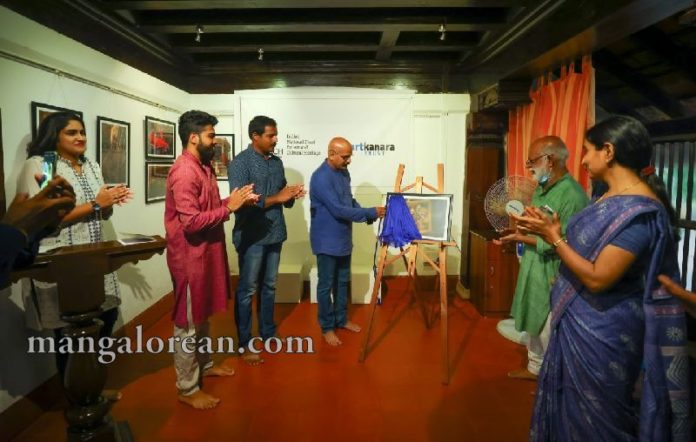 Mangaluru: ‘Stories behind the Lens – Capturing the Human Truths’, an exhibition of photographs by Vivek Gowda was inaugurated with the unveiling of a photograph by the Chief Guest Guruduth Kamath Udupi, eminent photographer, on Saturday, 17 April 2021 at 5:30 pm in the esteemed presence of Vani Rajagopal, Bharatanatyam artist, Kalakshethra, Chennai and Wilson Kateel, Poet, Lyricist and Editor of Arso Konkani monthly. The Exhibition was organized by the Mangaluru Chapter of INTACH (Indian National Trust for Art and Cultural Heritage) at Kodial Guthu Center for Art and Culture, G. G. Road, Ballal Bagh in the City, and the display will remain open to the public on all days till 21 April 2021 between 11:00 am and 7:00 pm. And the best part is, Admission is free. 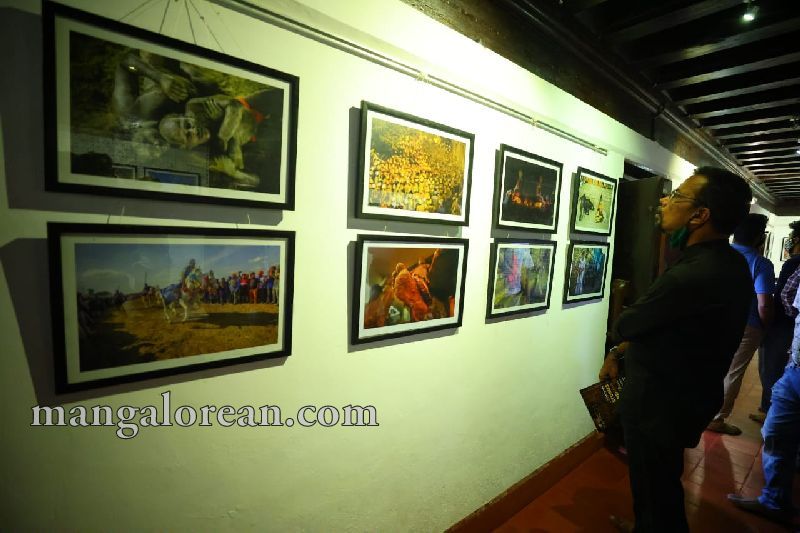 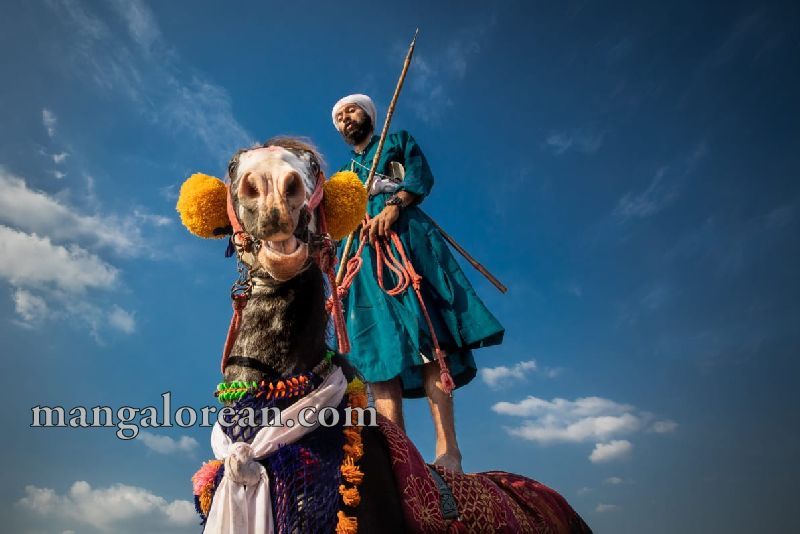 Kudla’s Pro-Photographer Vivek Gowda who was declared as ” Federation of Indian Photography (FIP) Photographer of the Year 2020′, for his photo story of Intha fishermen in Myanmar (Burma) and now come forward to display all his magnificent photo-shoots for the viewing pleasure of the public. Federation of Indian Photography, India’s esteemed body that recognises outstanding work in the field of photography, had awarded Vivek with the prestigious medal and a cash prize of Rs 50,000. 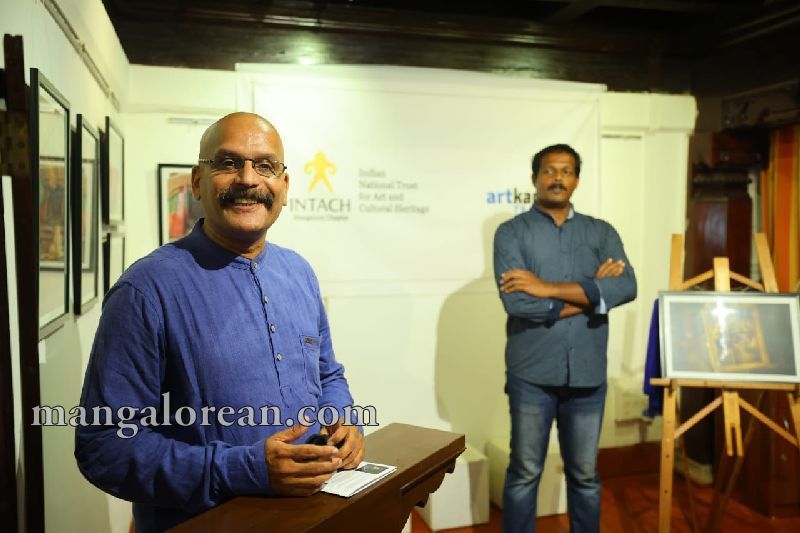 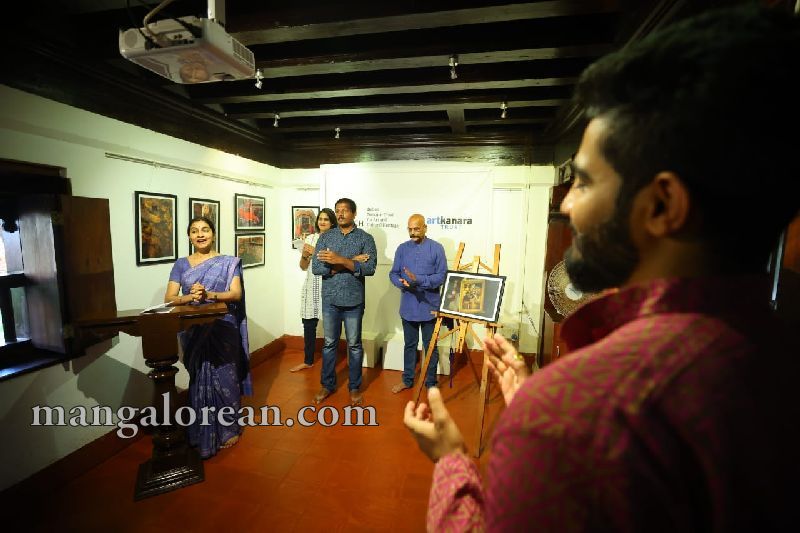 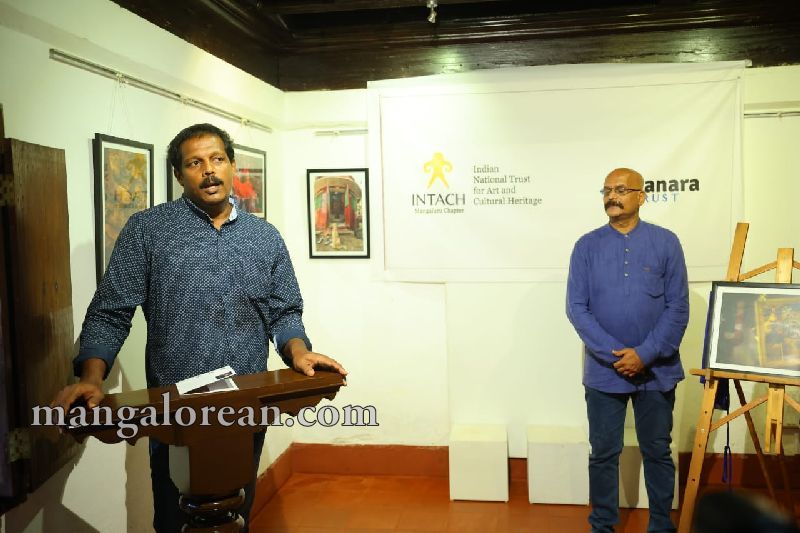 Vivek Gowda had travelled all the way to Shan State in Myanmar to document the story of Intha fishermen. Very few Intha fishermen still practice a unique form of traditional fishing. Their livelihood and daily activities are on the water and for them, boats are a way of life. Being an environmentalist, Vivek couldn’t resist telling a story about the Intha people through his camera, who loves to convey stories and conditions of human life through videos and images. Vivek’s areas of expertise are in genres of video editing, cinematography, people and documentary photography.

VIVEK GOWDA is a cinematographer, photographer and entrepreneur, who loves to convey stories and conditions of human life through videos and images. His areas of expertise are in genres of video-editing, cinematography, people and documentary photography. In addition to the above award, he has also received the ‘Best Editor’ award from Hamsa TV in 2017, won many international awards and accolades in different photography contests conducted by various countries. He has also bagged AFIP (Artist FIP) distinction from the Federation of Indian Photography (FIP). Vivek’s works represent his dedication towards his passion.

Most of his videos and images are intensely dramatic and follow the theme of storytelling. He runs a company named “Blink Films”. Here he mainly focuses on shooting advertisements, feature films, weddings and filming corporate events. Vivek is also a mentor for Panasonic Lumix Cameras. He has played an active role in sharing his learnings and experiences with other aspiring photographers. He lives and works in Mangaluru. He and his partner Sandeep Holla operate a production company named “Blink Films” which is focused on shooting advertisements, feature films, weddings and filming corporate events. Sandeep Holla is the winner of Better photography Wedding photographer of the year 2020. These two award-winning people behind the camera, have a huge fan following already for their unique style and portrayal of human emotions. Both Vivek Gowda and Sandeep Holla are mentors for Panasonic Lumix cameras.

After the inauguration of the Exhibition, addressing the gathering Guruduth Kamath said photography is an art that gives maximum joy to the artist. “Photographs freeze extraordinary moments for eternity. They capture the unique perspective of the photographer. Mind, heart and eye, all these three are needed to be a good photographer. The heart sees, the mind tells and the eye constructs the frame. You can capture the decisive moment only when you listen to your inner voice,” he said. 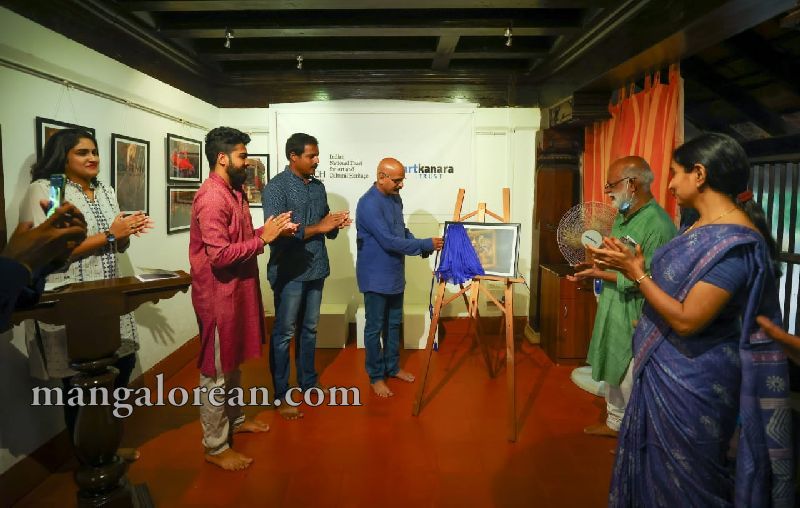 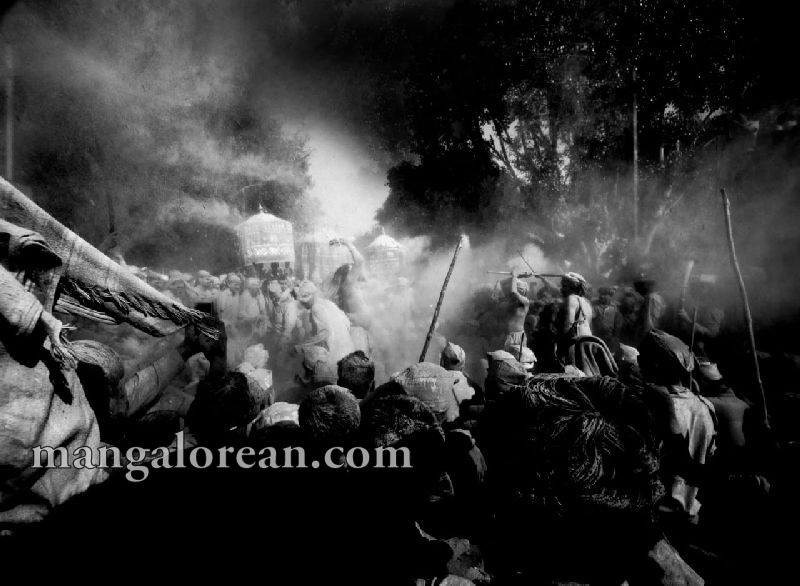 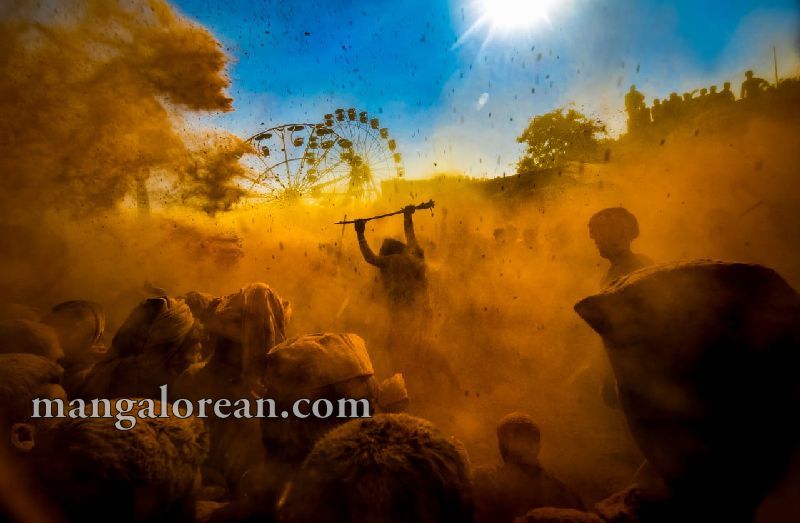 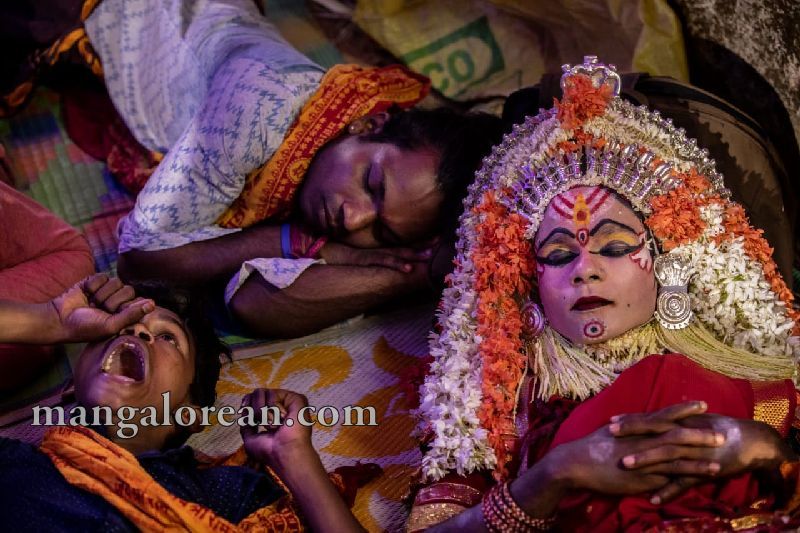 Bharatanatyam exponent Vani Rajagopal praised the devotion of young photographer Vivek Gowda to his art. Wilson Kateel described pictures as visual poetry. “The photographer sees the voice in the scene,” he said. Subhas Basu, the Convener of Mangaluru Chapter of INTACH introduced the aims and objectives of INTACH. The event is supported by Mangaluru Horse Riding Academy, Blink Films, Craft Zilla and Art Kanara Trust.

Ms Nikita G. Coutinho who is the associate editor and writer for ‘Artkanara Magazine’, and who has previously ventured into advertising as a Copywriter, apart from being an avid art enthusiast, dabbles in poetry as well, who compered this programme, speaking on “CAPTURING HUMAN TRUTHS” said, “It takes a simple Google search of “Festivals around the world” to have millions, if not billions of photographs fill up your screen with an array of colours, grandness and countless happy faces. These picture-perfect moments while full-of-life, are far from depicting the true essence that these rituals hold in our lives. As I scroll through Vivek’s collection of photographs, I see a keen eye, an observer looking for stories behind a lens. All his pictures share a common factor, and it is not that they capture festivals as they are, but they grab moments that are real, unobserved, and at angles, you may never have considered looking from”. 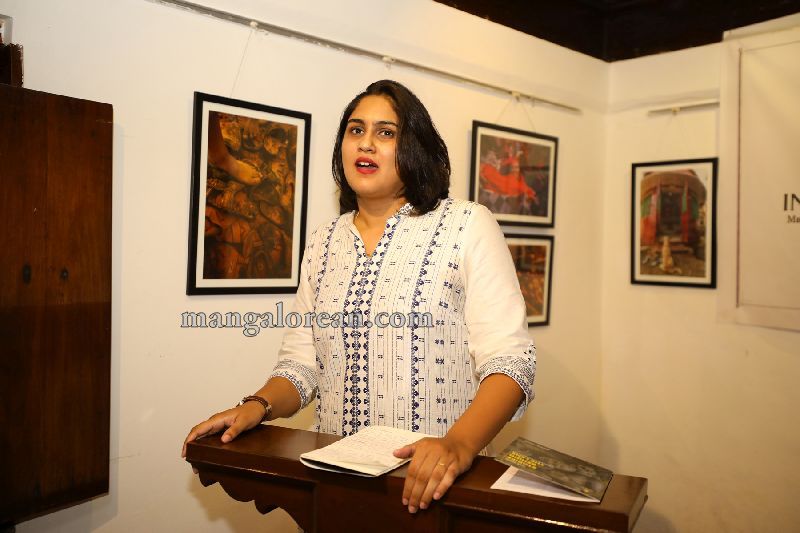 “Vivek Gowda­ is an exceptional photographer, cinematographer and entrepreneur. Growing up, he has lived in several cities across Karnataka, which has provided him with a life brimming with rich cultures and heritages. It is his curiosity to understand and observe the communities around him, that has influenced his visual tales. The power he wields through photography comes from his desire to interpret life in its truest, simplest form, so as to be understood by everyone. While he is lauded for his skill in the field, bagging Artist of the Year 2020 by the Federation of Indian Photography (FIP), what makes him stand out from his peers is his ability to see things from the point of view of the beholder”.

“It is through his photographs that I am immediately transported to the banks of the river Ganga, where I am standing among the crowds of people, watching artists transform into their chosen personas. I find myself feeling as vulnerable as the devotees in the temple, surrendering themselves to a higher power. That is what I believe to be the true essence of festivities, and what photography is all about – the ability to explore beyond the subject and capture human truths. The ability to encapsulate emotions in a single frame, the kind that can move you”.

“The photographs on display have an underlying theme that cuts through the clutter. It celebrates the age-old traditions that bind us together; it is a nod to the people who have devoted their lives to preserving the rituals, now known only by a few. Come, embark on a journey into the world of festivities through a set of new lenses”.

A LOOK BEHIND THE LENS:

“We are all made up of the experiences we live by and carry them along as we meet new ones. It only makes sense then as to why we would want to work towards inventing tools that could preserve them. The camera’s existence is just an extension of the many ways we have tried to capture the world around us, while the people behind them are the artists who try and weave together the stories that unfold in their presence. Vivek Gowda is such a storyteller, discovering new ways to see the world we live in. His humble beginnings in a small town with deep-rooted cultures have moulded and greatly influenced him. The tribes and communities that surround it such as the people from Coorg, South Canara and Malenad (Western Ghats), have immensely impacted his curiosity to explore and learn the abundance of rich languages, traditions and customs they possess”.

“His rendezvous with photography began as a child when he had received a gift in the form of a phone with an in-built camera from a relative, that he was enamoured by. He would take pictures and show them to his father, who in turn would tell their friends how great a photographer he was. The encouragement that he then received along the way, would help propel him forward. It was only during his time in college that Vivek enhanced his abilities by looking for inspiration in a local photographer. His skills had reflected well, with his pictures making it on the page of a weekly section in a newspaper. This trait of learning from his peers spoke of his nature to grow”.

“He mentions how his greatest teachers were the community of photographers he has met and befriended along the way. It helped him in seeing perspectives that differed from his own and allowed him to approach the subject matter in an unconventional way. This greatly impacted him as a photographer and videographer. Through videography, he discovered that it was the perfect device to be able to tell stories. He emphasized that it was much easier to encapsulate emotions through a minute video over a single shot. Editing them was also an enjoyable process that helped in projecting his vision in the most unique of ways”.

“When it came to photography, Vivek often travelled to new places. Rather than planning it out, he chose to let the destination surprise him. Interestingly, he prefers not to look at his previously captured photographs, rather he lets his gut shape the moment and his ensuing images. Being on the field is his source of escape that has helped him in rejuvenating his creativity. The photographs enable the viewer to see these popular places in a different light. They may seem mundane or bordering on the ordinary, yet they capture the truth rather than framing a flawless world. It presents the raw, blunt, real and layered livelihoods that live and breathe in our everyday environment. Photographs much like art should be self-explanatory or else it defeats the beauty behind them. I believe it is through these explorations that he is able to build his identity as a visual interpreter”.

“Vivek’s collection of pictures are influenced by his fondness for street photography – quick, clever and one-of-a-kind. He ensures that candidness is preserved as he tries his best not to disturb the environment he is in, rather to capture it in its natural form. Vivek explains that the beauty of street photography lies in the fact that no one picture is the same. It is ever-changing, fast-paced and there is always something around the corner to observe. His desire is to capture these fleeting moments before they pass by. I choose to believe that photographs are like time capsules. Saving the little bits of the past way after it has gone; sometimes tucked away in our memory cards, fitted into our albums, or framed behind a pane of glass; placed within particular places to be cherished from time to time. It is our little contribution in preserving the life we lived and the moments in life we would like to remember forever”.

“This series comes from a place of memory. From a time when Vivek saw the new world that he explored through his camera lens. It is also an invitation for us to live these moments vicariously through his eyes and to experience the human truths that were unexplored until now” concluded Nikita.

Upon being asked to share his “clicks of wisdom” for young aspiring photographers Vivek said, “Keep on practising and always look at others’ works in comparison to where you stand, this will be the force that keeps you going.”.