Mangaluru: Following close on its heel after Mangaluru City Corporation (MCC) had dedicated circles to Sri Narayana Guru at Lady Hill, Rashtrakavi Manjeshwar Govinda Pai near Kodialbail, Koti-Chennaya near Nandigudda, and also Mangaladevi Circle, among others, MCC has plans to enliven the coastal districts’ own ‘PILI NALIKE’ (tiger dance) at a circle. The Marnamikatte Circle near Mangaladevi Temple in the city will find a place for statues of Pili Vesha. The name of the place, ‘Marnamikatte’, itself is associated with the festival ‘Marnami’ (Navaratri), which is incomplete without ‘pili Evesham or ‘Pili Nalike’.

It should be noted that Former MCC mayor Premanand Shetty had put forth the proposal mooted by the public. He had said “The main idea is to enliven the tradition of Tulunadu, where Navaratri is celebrated vibrantly with pili vesha and various other veshas. The circle at Marnamikatte has a lot of religious significance related to the Navaratri festival. For instance, the word ‘Marnami’ itself was derived from the festival ‘Mahanavami’. Hence, the name of the place itself is closely related to the Navaratri festival, which is celebrated vibrantly with reverence at Mangaladevi Temple. Hence, we thought of developing the circle by giving importance to the cultural fervour of the region. We have plans to develop the circle by designing various structures related to the Marnami, including ‘pili nalike’. A final decision will be taken soon, Though initially, the Mangaluru City Corporation (MCC) had plans to develop Marnamikatte through private organisations. However, a proposal is being discussed to take up the project through the Mangaluru Urban Development Authority (MUDA)”. 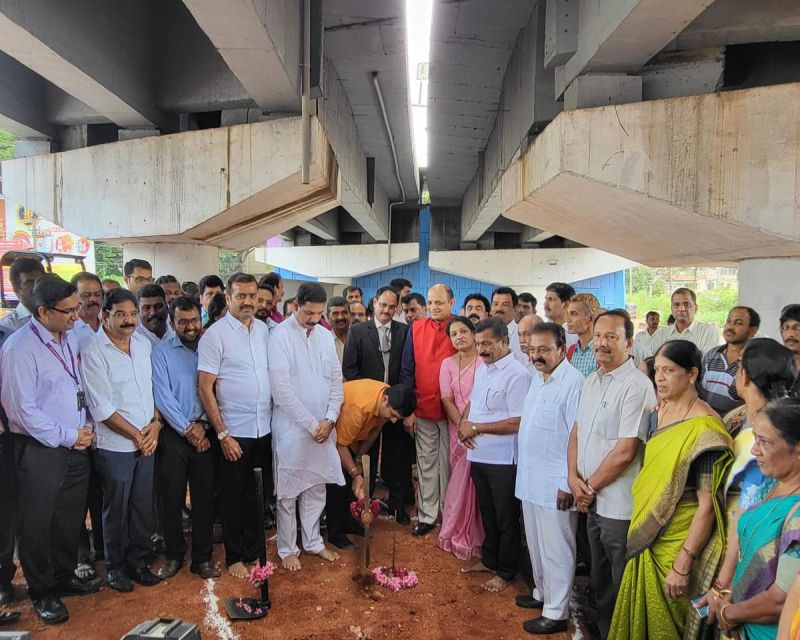 Also on Tuesday, Bhoomi Puja was performed for taking up five projects in the city through Mangaluru Smart City Ltd. Mangaluru City South MLA D. Vedavyasa Kamath said that the government will re-develop and beautify Marnamikatta, Urwa Market, Kankanady Pumpwell and Ambedkar Circles in the city soon. Addressing a gathering after performing ‘Bhoomi pooja’ for taking up five projects, costing Rs 9.3 crore, through Mangaluru Smart City Ltd. (MSCL) in the city, the MLA said that the Marnamikatte Circle will have statues of tigers, like the statues of lions placed in the Mangaladevi Circle which was inaugurated at Jeppu recently. Kateel said that the erstwhile Mahaveera Circle at Pumpwell Junction which had a huge ‘Kalasha’ was removed for building the flyover as part of the four-lane highway widening project of the national highway No. 66 (Kerala-Goa). The ‘Kalasha’ served as the landmark for entry into the city. The ‘Kalasha’ will be restored in the traffic island to be beautified in the same junction.

A B SHETTY JUNCTION

The other four projects comprised the re-development and beautification of A B Shetty Circle at a cost of Rs 40 lakh sponsored by the Bank of Baroda and the construction of 18 meters long and nine meters wide culvert on Pandeshwar main road at Shivaji Nagar for Rs 2 crore.