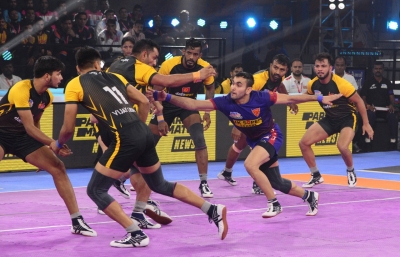 Bengaluru: Dabang Delhi put together a five-star performance to beat Telugu Titans 46-26 in the second game of the day at the Shree Kanteerava Indoor Stadium here on Saturday.

Dabang Delhi rode on the raiding of Naveen Kumar (12 points), Manjeet (9 points) and a superb defensive performance by Ravi Kumar and Ashu Malik to inflict a crushing defeat on the Titans and stay unbeaten this season.

The pre-match build-up had built the match up as a clash between the Titans’ defence and the Delhi offence, but within minutes it was clear that Dabang Delhi were not taking their defensive duties lightly. They raced into a 7-point lead before the Titans could even open their account. With barely six minutes gone, Delhi had already inflicted the first All out of the match, taking an 11-2 lead.

The Titans regrouped, but Delhi, and in particular Naveen’s ability to keep collecting bonus points and Manjeet’s razor-sharp raid, meant their lead was never truly challenged.

It wasn’t just the Dabang raiders though, and the statistics laid bare the brilliance of their all-round performance. Dabang had eight tackle points in the first half, compared to the Titans’ one. And they went into the break holding a deserved lead at 24-10.

Telugu Titans’ substitute Mohsen Maghsoudlou offered them a ray of hope as the second half began. On a Do-or-die raid, the Iranian managed to get the Titans a crucial point to chip away at the lead.

Immediately though, Delhi snatched back the initiative. Manjeet, on his very next foray, initiated a Super raid, touching out Nitin, Mohit and Mohsen. The lone man standing, Vinay, was caught out as the team from the capital city inflicted their second All out to take a massive lead at 30-12.

Despite the huge lead, Delhi did not slow down, and at the other end the Titans’ errors kept coming. By the end, it was just a matter of not how or when but by how much Delhi would win. The answer was 20 points, the second time they inflicted this margin on an opponent this season.