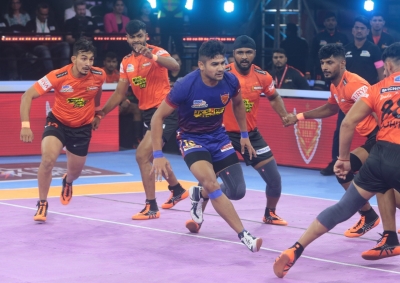 Bengaluru: Dabang Delhi KC captain Naveen Kumar racked up 13 points and helped his team thrash U Mumba 41-27 in the opening match of the Pro Kabaddi League season 9 at the Shree Kanteerava Indoor Stadium, here on Friday.

Dabang Delhi KC earned momentum as Naveen Kumar pulled off a flurry of fantastic raids. He was backed up brilliantly by defenders Vishal and Sandeep Dhull as Delhi inflicted an ALL OUT to take a massive lead at 11-2 in the 9th minute.

Naveen continued to step on the pedal to help Delhi widen the lead at 14-5. The Dabang Delhi KC defense unit led by Krishan kept tackling the U Mumba raiders as Delhi led 19-10 at half-time.

U Mumba showed a bit more urgency in the second half with Ashish picking up some crucial raid points and Kiran Magar pulling off a couple of brilliant tackles, but the Naveen Express kept raging on and kept Delhi in the lead at 28-20 in the 31st minute.

With only three U Mumba members on the mat, Naveen effected a multi-point raid and recorded his first Super 10 of the season. Moments later, Delhi inflicted another ALL OUT and led comfortably at 33-21.

Delhi sealed the fate of the match when they attained a massive 12-point lead in the 40th minute. Naveen continued to pick up raid points as Dabang Delhi KC eventually walked off the mat as winners.