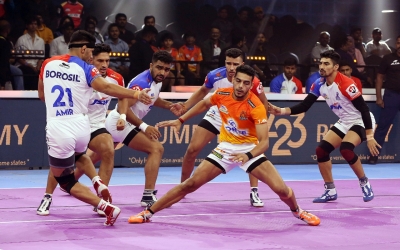 Puneri Paltan continued their excellent form in the Pro Kabaddi League (PKL) Season 9 as they defeated Haryana Steelers 41-28 at the Gachibowli Indoor Stadium here on Friday.

Aslam Inamdar emerged as the star of the night for the Pune side with 10 points on the night.

Inamdar started the match with a bonus point before Fazel Atrachali carried out a brilliant tackle on Steelers’ raider Manjeet to help his team take the lead.

The Steelers came back into the match as Joginder Narwal used his experience to register a Super Tackle. However, the Paltan maintained their rhythm and attained a massive lead at 13-3.

Joginder Narwal tried to repeat his heroics but this time Mohit made his move early to grab the player and helped his team stay in the lead.

Haryana saw a ray of hope when Meetu effected a brilliant raid, but Puneri Paltan carried out a Super Tackle and Aslam Inamdar sent Manjeet out of the mat as the Pune side sat comfortably at 20-10 at the end of the first half.

The Steelers tried to make a comeback in the second half, but the Paltan defense continued to stand tall. Raider Meetu lunged forward in the opposition’s half to grab a point, but he was tackled by Sanket Sawant. Fazel Atrachali, then, used his experience to tackle Manjeet as the Pune side inflicted an All-Out to attain a stronghold of the match at 31-17.

Vinay picked up a Super Raid late in the game, but the Steelers were too far behind Puneri’s score. The side from Pune kept raging on and eventually closed out a comprehensive victory.