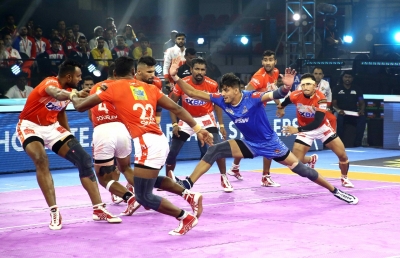 Bengaluru: Rakesh and Sourav Gulia were on fire for the Gujarat Giants as they handed the Haryana Steelers yet another defeat in the Pro Kabaddi League (PKL) Season 9 at the Shree Kanteerava Indoor Stadium here on Saturday.

The Giants, who have now won two matches in a row, triumphed with the score reading 42-38.

The Steelers had the better start on the night, with the raiders and the defensive unit working in tandem, especially with Amirhossein Bastami causing some serious problems early on.

However, the Giants edged ahead through Rakesh’s raids before Jaideep and Mohit brought the Steelers back into the match, in what was turning out to be a close game. However, Rakesh inflicted an All Out on the Steelers to help the Giants surge ahead.

Meetu, Jaideep and Manjeet pulled up their socks in the final minutes of the first half, as the Steelers roared back and ended the half with a 6-point lead at 22-16.

The Giants started the second half quite strongly and had the momentum going their way. The Steelers found it a tad bit tougher to stop their opponents as Sourav Gulia and Rakesh were on song for Gujarat.

The Giants continued to score points as Rakesh went on to pick up another 15-point haul to help the Giants lead the Steelers by four points in the 35th minute.

The Giants continued to build on their lead and even as the Steelers gave it their all, Gujarat held on and picked up an important win.