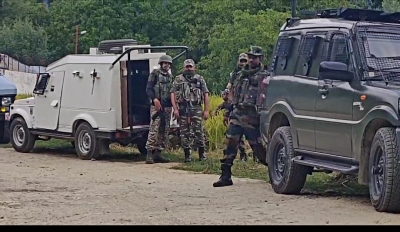 Jammu: In a major success, Jammu and Kashmir Police and Indian Army’s counter-insurgency Rashtriya Rifles have busted a terror module in Poonch and foiled a major terrorist plot to carry out attacks on religious places, police said on Sunday.

Police said three militant associates have been arrested so far and six grenades have been recovered from their possession.

Senior Superintendent of Police, Poonch, Ramesh Angral said that a joint team of Jammu and Kashmir Police and its Special Operation Group along with Rashtriya Rifles’ Romeo Force’s 49th Battalion set up a checkpoint in the intervening night of Saturday and Sunday at Basooni and intercepted a vehicle in which Mustafa Khan, a resident of Galuta Harni, was travelling. He was apprehended and questioned over his suspicious movement.

“During questioning, the accused broke down and confessed his involvement in militant related activities and on his confession, two more militant associates were apprehended — Mohd Yaseen, son of Walayat Khan and Rayees Ahmed, son of Mohammad Iqbal, both resident of Dabbi Balakote,” police said.

On questioning the trio, vital clues were developed and searches were conducted in the house of Mustafa Khan from where six grenades were recovered.

The SSP also said that during investigation, it came to fore that the arrested persons were in regular contact with the handlers in Pakistan who were instructing them to carry out terror strikes.

“It has also come to fore that the accused were planning to carry out strike at religious places in Poonch which was an attempt to trigger communal tension in the region. Some videos regarding tactics of grenade lobbing were also found in the mobile phones of accused,” police said.

The SSP said that it is a major success for security forces as a major terror plot of militant strikes and inciting communal violence has been averted in Poonch.