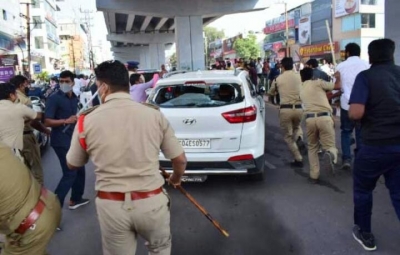 Hyderabad: Tension prevailed at LB Nagar in Hyderabad on Friday as police arrested gau rakshaks to foil their plans to stage road blockade on Hyderabad-Vijayawada highway demanding protection of cows.

Dozens of protesters were taken into custody. Police personnel were seen physically lifting the protesters and shifting them to police vehicles and whisking them away.

Yuga Thulasi Foundation had given call for ‘sadak bandh’ to press its demand for declaring cow as the national animal.

Foundation chairman and Tirumala Tirupati Devasthanam (TTD) Board member Kollisetti Shiva Kumar was among those arrested by police.

Police also detained protesters at Vanasthalipuram and Meerpet to prevent them from heading towards LB Nagar crossroads for ‘sadak bandh’.

Shiva Kumar condemned police ‘high-handedness’ and announced that his organisation will continue protests till the Central and state governments take steps for protection of cows.

He said ‘maha padyatra’ will be organised from Bhagya Laxmi temple at Charminar to Bahadurpura on January 15. Foundation also plans to organise ‘maha dharna’ at Nizam College.

He voiced concern over the continuing slaughter of cows every day.

Last month, a one-day hunger strike was organised by the Foundation demanding that cow be declared as national animal of India.