Chikkamagaluru: Even after Karnataka Governor had promulgated a stringent anti-cow-slaughter ordinance, where under the new law, the penalty for any other slaughter than what’s allowed will range from Rs 50,000 to Rs 10 lakh per animal and 3-7 years’ imprisonment. It also gives the police power to search and seize on the basis of “reason to believe” that cattle is being sold, purchased or disposed of for the purpose of slaughter. Slaughtering of nearly all cattle – cow, calf of cow, bull, bullock – is now illegal in the state of Karnataka as the Governor has promulgated the anti-cattle slaughter ordinance. The Yediyurappa-led BJP government in the state passed the bill in the Legislative Assembly but failed to introduce the Karnataka Prevention of Slaughter and Preservation of Cattle Bill in the Legislative Council. The government then took the ordinance route and the cabinet passed the ordinance. 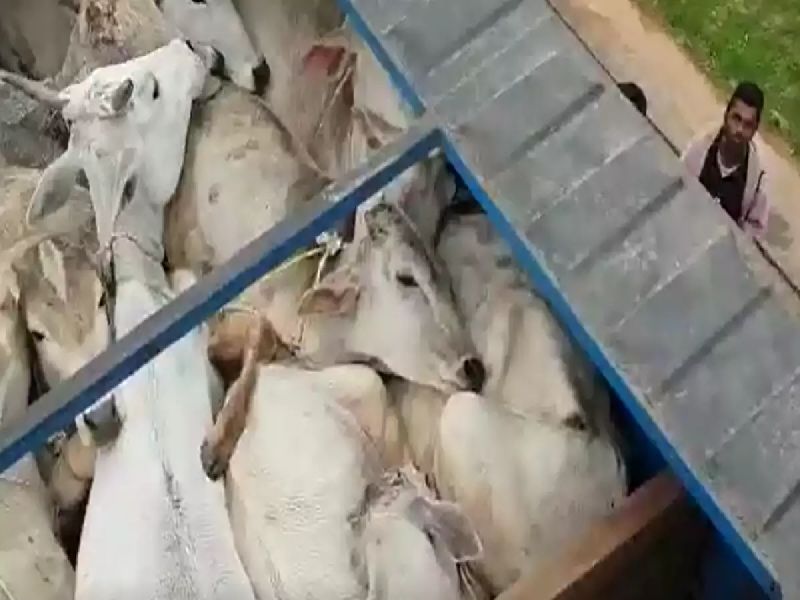 Picture for Illustration Only

According to the new law, only male or female buffalo above the age of 13 can be slaughtered, but cows, calf of a cow, bull, bullock are prohibited from slaughter. This means that beef meat will be unavailable in the state and only buffalo meat from buffaloes above 13 years of age can be sold. The existing Karnataka Prevention of Cow Slaughter and Cattle Preservation Act, 1964 had banned the slaughter of cows and calf of she-buffalo. However, the older law had permitted bull, bullock, buffalo (male or female) to be slaughtered if the animal was above 12 years of age, or if it was incapacitated for breeding, drought or giving milk due to injury, deformity or any other cause. The legislation also penalizes people who indulge in smuggling, illegal transport, and atrocities on cows by slaughtering them.

In spite of all these new rules and punishments imposed by the Governor on slaughtering or illegal transportation of cattle, people still take a chance involving in cow slaughter or illegal transportation of cattle. Reports coming from Chikkamagaluru stated that after the controversial cow slaughter ban law was enforced in Karnataka through an ordinance, the first case under the law was registered in the district on Friday 8 January 2021. It is learnt that thirty-four cattle were being illegally transported in two containers to Mangaluru from Ranebennur in Davanagere district via Sringeri during the wee hours on Friday when a group of youngsters stopped them near Tanikodu check post.

It is learnt that one of the drivers of the vehicle fled from the scene, while the other was manhandled by the crowd, and held him until the police arrived and took away both the containers and the cattle. Police have also registered separate cases against the two drivers in Sringeri police station. Abid Ali from Davanagere, the injured driver due to mob attack has been admitted for treatment in government hospital-Sringeri.