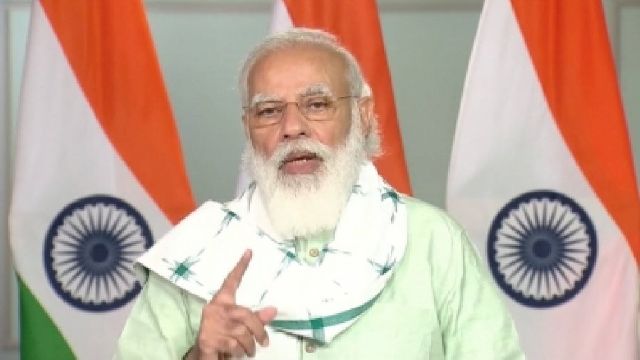 New Delhi:  Without taking names of political rivals, Prime Minister Narendra Modi said on Tuesday said that political dynasts posed the biggest threat to democracy and appealed to the youth to enter politics to redress the situation.

“There are still people who want to do politics only to save their family’s name in politics. This sort of politics keeps ‘nation first’ at the second place and ‘my family and my benefits’ as first priority.

“The youth need to enter politics to end this practice of family-based politics. It is important to save our democratic practices,” he said at a valedictory function of the second Youth Parliament here.

“Dynasts are the biggest threat to democracy and this leads to social corruption; more youths should come forward to curb this problem.”

The Prime Minister maintained that people nowadays supported those who worked with honesty and sincerity.

Modi said that politics of nepotism was nearing its end, adding that it hadn’t ended completely though.

“Those who have corruption as part of their legacy now are not able to come out of that burden.”

Invoking Swami Vivekananda, the Prime Minister advised the youth to believe in themselves and take the nation forward. The new National Education Policy 2020 will take the youth towards modern education and learning, he added.

The PM also listened to the prize winners of National Youth Parliament Festival (NYPF)that aims to lend voice to youths between the age of 18 and 25.

NYPF is based on an idea put forth by the Prime Minister in his ‘Mann Ki Baat’ radio address on December 31, 2017. The first NYPF was organised from January 12 to February 27, 2019 with the theme of ‘Be the Voice of New India and Find Solutions and Contribute to Policy’.