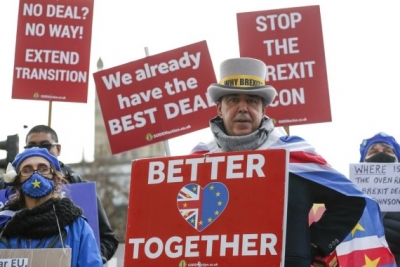 London: Britain’s post-Brexit trade deal with the European Union (EU) leaves workers’ rights and environmental protection at risk of erosion and will slow the country’s economic recovery, which has already been affected by the Covid-19 pandemic, a British think tank warned in an analysis.

The agreement offers clear benefits to Britain and the EU, which would have been lost if no deal had been negotiated, however, its commitments on labour and environmental standards are considerably weaker than expected, said the Institute for Public Policy Research (IPPR), a London-based think tank, on Sunday, Xinhua news agency reported.

Published its assessment on Sunday, the IPPR said the bar for proof of breaches of the “level playing field”, one of the sticking points in the long Britain-EU negotiations, to safeguard the issues is so high that it will be rarely enforced.

In aiming for an agreement which guarantees maximal sovereignty, the British government has watered down the “level playing field” requirements on areas such as labour and environmental protections and secured only limited benefits in market access, said the think tank.

“In the short-term, this is likely to lead to disruption to trade flows, including at the border. Over the longer term, the economy will adapt to the new arrangements, but barriers to UK-EU trade will likely lead to slower growth and a more prolonged economic recovery,” the IPPR added in Sunday’s assessment.

Given it is notoriously difficult to prove that any lowering of projection affects trade or investment, “the deal is unlikely to prevent the UK government from weakening EU-derived labour and environmental policies if it so chooses,” said the IPPR.

“This leaves protections for workers, climate and the environment at serious risk of being eroded,” said Marley Morris, an IPPR director focusing on trade and EU relations.

“This thin deal is better than no deal at all, but still creates major trade barriers with our closest neighbour, which will inhibit growth and slow the economic recovery,” Morris added.

The trade deal, which came after nine months of arduous negotiations between Britain and the EU, was announced Thursday by British Prime Minister Boris Johnson and European Commission President Ursula von der Leyen. It will come into provisional force on Jan. 1, 2021 after the Brexit transition ends on December 31, 2020.

The landmark deal, if approved by British and European parliaments, will guarantee tariff-free trade on most goods and create a platform for future Britain-EU cooperation on issues such as crime fighting, energy and data sharing.

The free trade deal is the biggest bilateral trade deal signed by either side, covering trade worth around 668 billion pounds (about US $905.4).

Britain is the EU’s third largest trading partner in goods, following the United States and China.