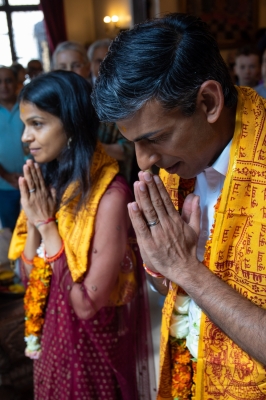 London: Close on the heels of Britain getting its first Hindu Prime Minister, and launch of an independent inquiry into the recent Hindu-Muslim clashes in Leicester, a report in a UK-based daily says that “Britain’s Hindus are smart, rich and very well behaved”.

“There are just 329 Hindus in UK prisons, the lowest of any religious cohort, and they are better qualified than the Christians and earn more. Now Rishi Sunak, a second-generation son of a GP (general practitioner), is in No 10,” The Times report, released on Sunday, said.

The most recent census, says the report, shows that 15.4 per cent of British Indians, nearly 50 per cent of whom are Hindus, were in professional and managerial roles, the highest proportion of any group.

It further adds that 59 per cent of British Hindus reported having a degree of higher education, nearly double the 30 per cent of Christians.

By 2012, Hindus living in London had a net wealth of 277,400 pounds (including property), and now the country’s Indian-origin Prime Minister Rishi Sunak and his wife Akshata Murty alone are worth an estimated 730 million pounds ($844 million).

The couple’s net worth is roughly twice that of King Charles’ estimated 370 million pound personal fortune.

Reacting to the report, Lord Rami Ranger CBE, who hails from Punjab, tweeted: “Great tribute to the Indian values that make us peaceful, prosperous and progressive.”

The group, along with 15 other reported Hindu organisations in the UK, has been at the forefront calling for boycott of city mayor Peter Soulsby’s inquiry into the east Leicester clashes, following an India-Pakistan cricket match in August.

Most Hindus are unhappy with the appointment of hate crime expert Dr Chris Allen as the head of the probe panel, whom they call ‘biased’.

In the 1951 Census, just 624 people with South Asian heritage were recorded as living in Leicester. Now, 70 years on, the city has one of the highest proportions of British South Asians.

England and Wales are now home to 983,000 Hindus, and 47 per cent of the British Hindus live in London, accounting for 5 per cent of the capital’s population, says the Times report.

Hindu migration to the UK started in 1947 after India’s Partition. In 1970s, more Hindus came to Britain from East Africa after then Ugandan leader Idi Amin expelled Asians.