Home Fit & Fun Entertainment Pratheek Shetty! The journey itself is the reward… 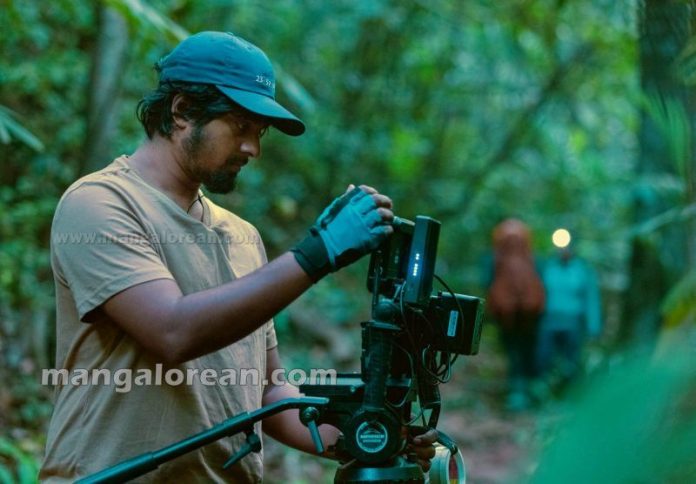 Pratheek Shetty! The journey itself is the reward…

The Kannada film industry, which has been around for decades, has seen a significant shift in terms of new voices and narratives that have blurred the lines between commercial, experimental, and parallel films. 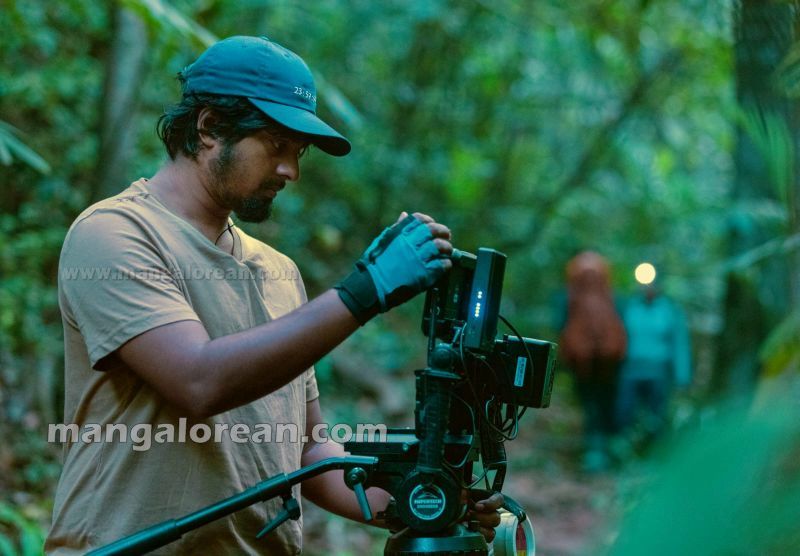 Kannada cinema is eyeing the pan-Indian market after the huge success of Hindi dubs of Telugu and Tamil films such as RRR, Pushpa: The Rise- Part One, and Rajinikanth’s 2.0. Though the action drama KGF: Chapter 2 is one of the highest-grossing films of all time, grossing Rs. 434.70 crore on its April release, other relatively smaller films—777 Charlie and Vikrant Rona, and most recently Kantara—have also managed impressive numbers. According to industry insiders, the Kannada film industry is making a concerted effort to create larger-than-life films rather than region-specific narratives, with big stars like Yash and Rakshith Shetty.

Kannada cinema has worked wonders in the past decade and is witnessing growing undercurrents of projects that represent art, the beauty of narration, camera intelligence and tremendous new talent.

While getting candid with the man himself, we explored the hidden vaults of this editor and DOP, who now is eagerly waiting for Gandhada Gudi to hit the screens.

Hi Pratheek. Thanks for having us over. Tell me, what pushed you to enter the cine world?

“I believe in destiny. And destiny planned it all. However, It was my late father who knew I could get into this field before anyone else could. He gifted to me my first camera.

While I was known to be an avid photographer back in college, I saw a real breakthrough only after associating myself with Ricky Kej. I worked as a cinematographer and editor in his studio for three consecutive years.

Again, his work inspired me. Climate change should concern us all. To have an opportunity to bring out the urgency that surrounds this issue, drove me to continue working with him. It was during this time, I began to realise that film is a powerful medium to reach out to the larger audience. Working with Ricky taught me the power of music in bringing everyone’s attention to climate change.

To answer to your question, I was never pushed into choosing Kannada Cinema. I was simply passionate about it. 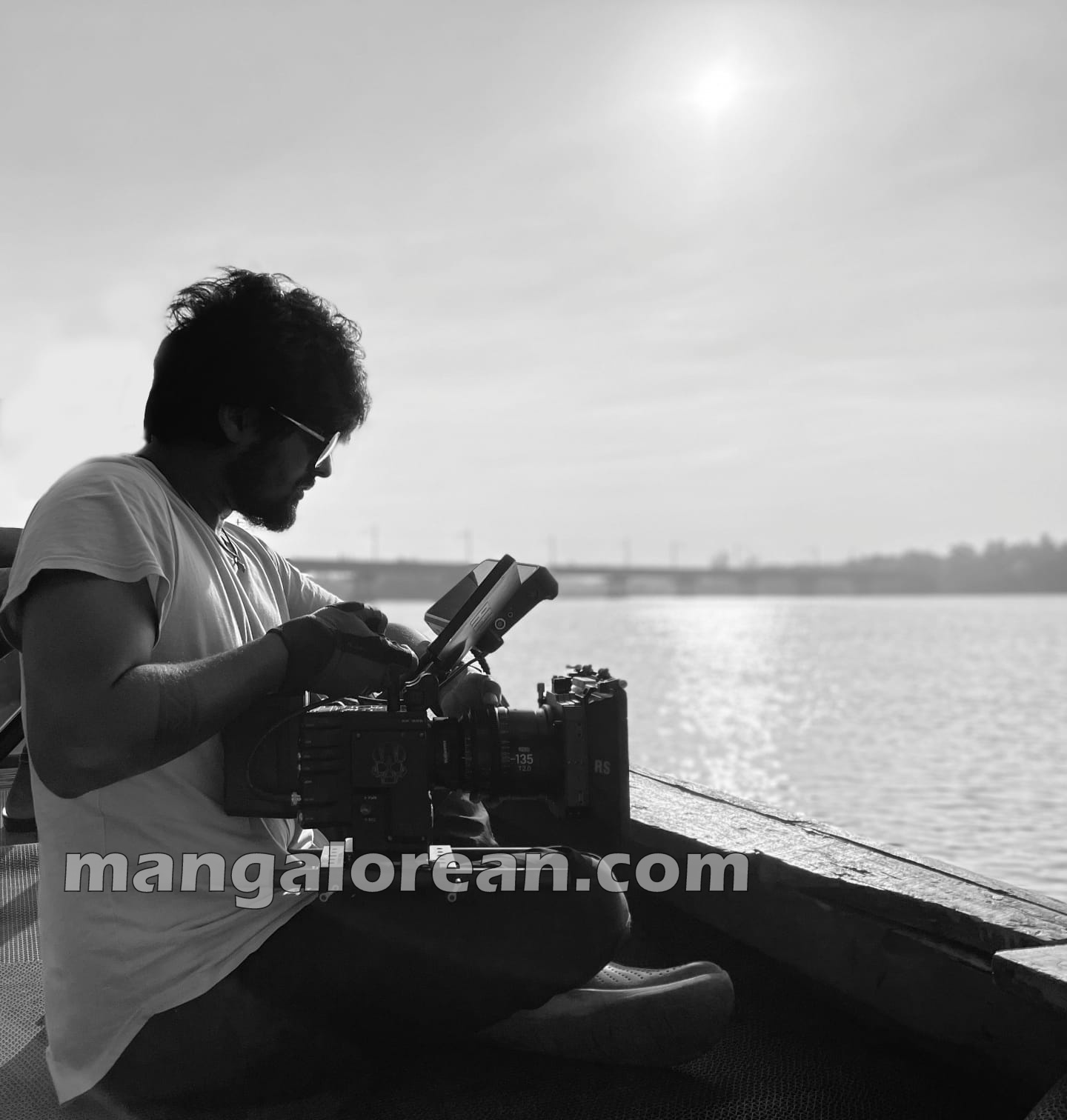 How do you feel about being a part of the Grammy winning album Divine Tides? What avenues did that open for your career?

Like any other film maker, I felt eclectic. I directed and shot one of the music video from the album Divine Tides by Ricky Kej and Steven Copeland.

The award did justice to the teams’ efforts. The album navigates the cause through art and music. I am a musician myself. It is music that binds me with most directors and artists. I believe music harmonises all ideas into creating something phenomenal.

The industry has been kind to me. I worked on songs like Bengaluru for French Biryani, Demon in me and intro from the film Garuda Gamana Vrishabha Vahana , Mother Earth, and Aigiri Nandini. The support has been tremendous. I am truly humbled. 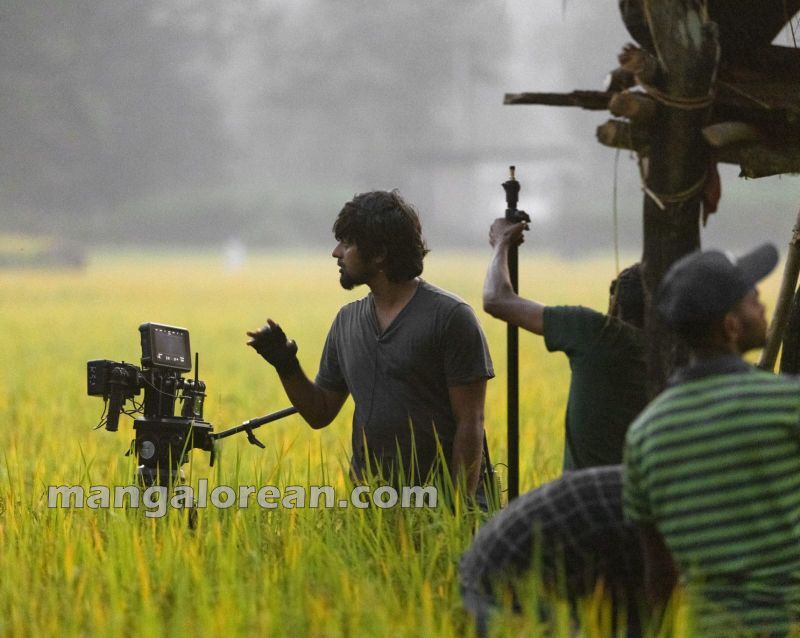 Great. Could you give us a brief run through on your journey from Sarkari Hiriya Prathamika Shaale to 777 Charlie ?

Sarkari Hiriya Prathamika Shaale was my first feature film that I worked as an editor. In fact Rishabh had been following my work, especially the albums that I worked on. When he gave me Karavali (song) to film and edit, he was extremely happy with the output.

This drove him to take me in as the editor for the entire project. And the film went on to become my first editorial debut for a feature film.

After hours of effort, I got to see the true potential of a narrative. This project paved me a way to bring out the true essence of the narrative. As the film touched a sensitive nerve of the audience with the kasargod issue, The story demanded justice to the entire issue, which is to showcase the bravery of young children, who came together to save their school from being shut down.

Having said that, 777 Charlie was a different world altogether. It was a director’s film. Kiran and I would sit together and work on edits soon after the shoot. Therefore editing was a parallel process. It took around 4 years to complete the project and I enjoyed every bit of it. I am a dog lover myself. 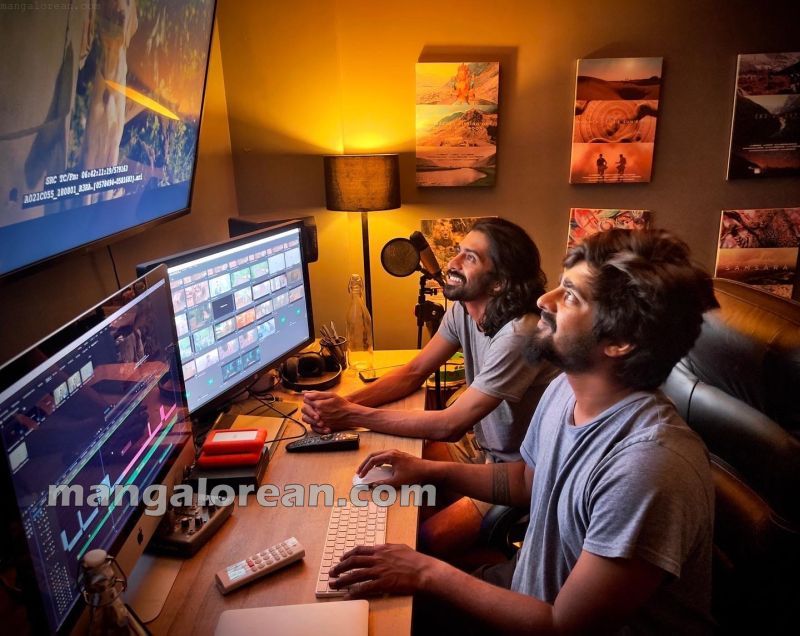 777 Charlie was like the icing on the cake! They say that certain projects really change you as a person for good. I believe Charlie was that project for me. While I travelled with Charlie and Dharma, their transitions became mine. Their angst and internal turmoil.. we’ve lived through their character collectively. I can attest on behalf of everyone who was associated with that project. That film changed us all.

I was not just an editor in this project, I pride myself of having closely associated with Kiran’s directorial craft. I went to most of the shoot schedules. Kiran, luckily for me, shared the same zeal for music. I guess we bonded there. Music, as I mentioned earlier, binds me with my craft. We would mess around with the raw files with reference music to bring out the emotions in a particular shot. He is by far one of the best directors I’ve worked with. Our chemistry was impeccable.

Our work of 4 years, where we all lived in the world of Dharma and Charlie payed off.. after receiving a tremendous response from the audience.

Amazing. How was Kantara different from the rest of the films?

To begin with, Kantara is my second film with Rishabh sir. The first was Sarkari Hiriya Prathamika Shale. My editorial debut that went on to win a national award for the film.

Rishabh sir is that supernova the industry witnessed exploding in all his projects. He has a knack to bring the best out of people. I guess he did the same with me. When he came to me with the initial shots of Kantara, I was thoroughly impressed. We share the same cultural lineage. I for one, can never get past my cultural roots.

But it was Rishabh sir and he knew exactly what he was doing. Having grown up to Kola and the powerful experiences of the deities, I knew my knowledge would aid me in formulating a story out of Kantara.

Rishabh grew as a film maker in the industry and I have huge respect towards him. He made me a part of this divine project.

For Kantara, I dove into my memory lane to make the film as realistic as ever. On the Editorial front this project had immense scope and Rishabh gave me the freedom to explore. I will be eternally thankful to him for taking me back to my childhood through Kantara. It truly was a divine experience.

Truly Magical Pratheek. Now comes a point where we have to address the ELEPHANT in the room. In both literal and figurative senses. GANDHADHA GUDI. tell us.. how was it for you? To have worked with the last project of Puneeth sir.

Let me just begin by saying how fortunate I feel to have worked with Appu sir on his last project.

I’ve been working with Amogh for over 8 years now. We were collaborators for Ricky Kej’s projects. 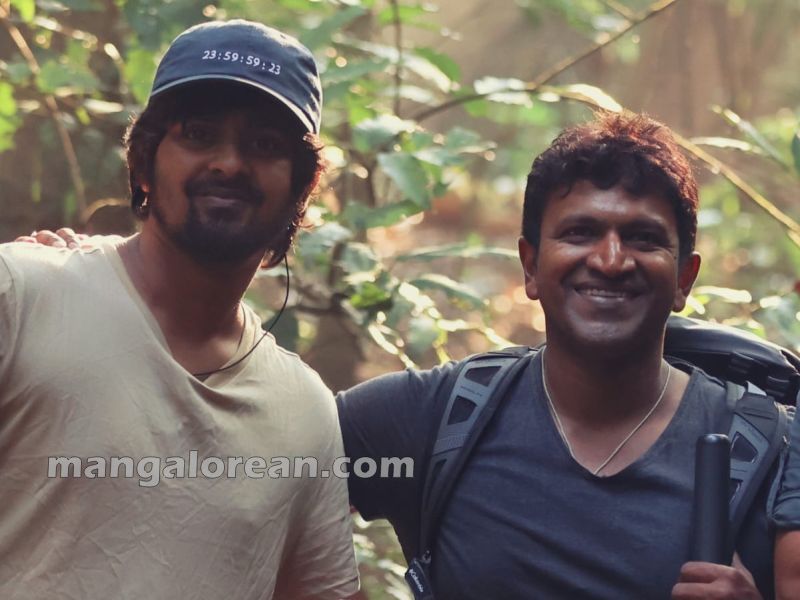 When i was called to discuss an opportunity to work as a DOP for Appu sir, I could feel the adrenaline pick up. I am one of his eternal fans. To work with an idol is an opportunity that never comes our way. I grew up to his songs and instances where I danced on his songs are many in my childhood.

The day one of the shoot is still fresh in my memory. Appu sir carries this energy, an unexplainable aura, it triggers everyone positively.

To travel with this ball of energy all over Karnataka was a fulfilling experience for me. Each schedule called for a different experience. We never knew what to expect. Some were rain forests, some were dry, and the rest were dauntingly unknown.

Filming for this project was challenging. There isn’t a script to stick to. Endless shoot hours tracking the Wildlife was not easy. In fact I had a task to first understand the flora and fauna, research upon the species behaviours and habitat to capture them into a film.

Sometimes we waited for days to get even a single footage of an animal. But the excitement remained the same. Each schedule was a new learning. This film was pure love. I enjoyed capturing it. And Gandhada Gudi is my debut film as a Director Of Photographer/ Cinematographer for a feature film. It couldn’t have been better. 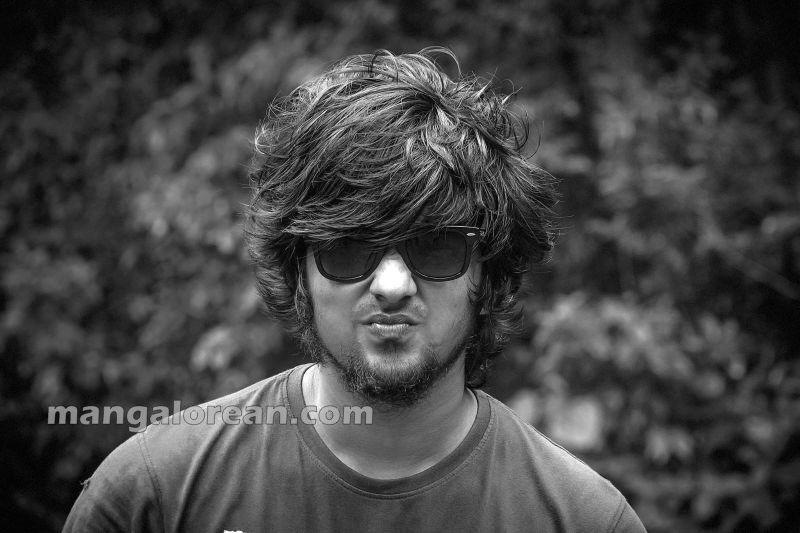 Puneeth sir was an inspiration through and through. He wore humility like a jewel around him. This film is also his last journey. He travelled the whole of Karnataka just to show the audience the beauty that lies within our state. Through this project, he wished to bring the nature, wildlife and glory of Karnataka to viewers’ reach.

Technically, the project was challenging. We shot the film completely on natural light and with a limited crew of 10-15.

It’s a raw theatrical experience and everyone should watch it just for its sheer beauty, if not anything.

I am simply grateful to Appu sir for taking us on this journey with him. He was a true inspiration and I will forever cherish the time spent with him. I couldn’t have imagine that I won’t be able to watch the final output with him on the big screen. But I am sure he is extremely happy with the film as Gandhada Gudi was his dream project.