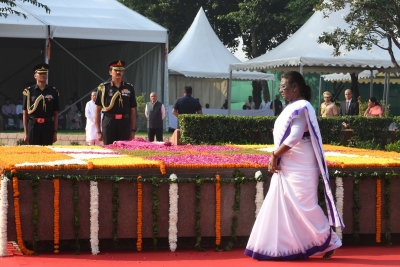 New Delhi: President Droupadi Murmu paid floral tributes to the father of the nation at the Rajghat on his Jayanti on Sunday morning and urged prople to “rededicate themselves to the values of his life.

She said that Mahatma Gandhi’s birth anniversary serves as an occasion for everyone to “rededicate themselves to the values of his life” and urged everyone to follow his footsteps and walk the path of truth and non-violence.

“A century ago, Gandhiji inspired millions with his call of Swadeshi and his stress on self-reliance. The making of an Atmanirbhar Bharat, which is under way, is, thus, inspired by the vision of the Mahatma and is intended as a true tribute to him. The India of his dreams is a clean India, a healthy India. The initiatives taken in this regard have been bearing fruits now,” the President said in her message on this occasion.

“As we enter the Amrit Kaal, the period before the centenary of Independence, it is heartening to note that the young generation too has been taking inspiration from Gandhiji’s works. When the world is going to face more and more complex challenges, his life continues to serve as a lighthouse, helping us negotiate the path amid turbulent waters,” she said.

“Humble tributes to former Prime Minister Shri Lal Bahadur Shastri ji on his birth anniversary. Shastri, who gave the slogan ‘Jai Jawan, Jai Kisan’, played a special role in Green Revolution and White Revolution. Shastri ji’s simplicity and high ideals are a source of inspiration for all the countrymen even today,” the President said.