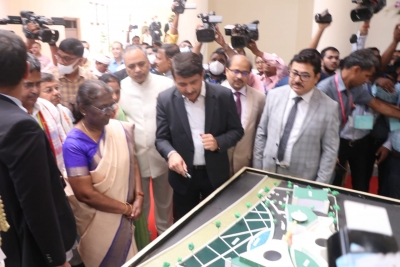 Agartala:  President Droupadi Murmu, who arrived in Tripura on Wednesday, inaugurated a Judicial Academy and laid the foundation stone of the National Law University at Narsingarh, on the outskirts of the Agartala city.

This was her first visit to the northeastern region after assuming the highest office on July 25.

According to the officials, National Law University, Tripura under the Higher Education Department of the state government, would now function from the Tripura Judicial Academy as both are adjacent places.

Prof. (Dr.) Yogesh Pratap Singh has recently been appointed as first Vice-Chancellor of National Law University, Tripura, for which the state government has allotted 9.23 acres of land at Narsingarh for setting up of a permanent campus of the varsity.

Officials said that students from the northeastern and other states of India would be able to take higher studies on law in the University, first of its kind in the northeastern region. They said that in the Tripura Judicial Academy training would be provided to the judicial officers and officers of other departments of Tripura government, who are discharging judicial, quasi-judicial or administrative functions related to law.

In the academy, constructed on five acres of land and at a cost of Rs 23.33 crore, training would also be provided to the ministerial officers of the Tripura High Court, district judiciary and also to hold and conduct law lectures, conferences, seminars and competition in the field of law.

Later in the day, the President would inaugurate the newly constructed MLA hostel at Capital Complex in Agartala and lay the foundation stone of seven other projects.

Murmu on Thursday would flag off a new passenger train between Agartala and Kolkata.

The Tripura government would also accord a civic reception to the President on Wednesday evening.