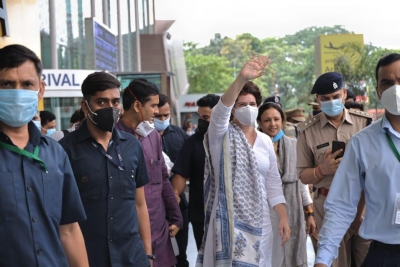 Priyanka arrives in Lucknow to a tumultuous welcome

Thousands of Congress workers greeted Priyanka at the Chaudhary Charan Singh airport and a long winding convoy of vehicles accompanied her as she headed for the Congress headquarters, covering a distance of about 13 kilometres.

Priyanka was greeted with flowers, bouquets and slogan shouting along the route.

She offered floral tributes to Mahatma Gandhi before reaching the party office.

Later in the day, the Congress leader will meet party leaders, district presidents and other functionaries. She is also scheduled to interact with students, farmers, former MPs, MLAs and unemployed youth.