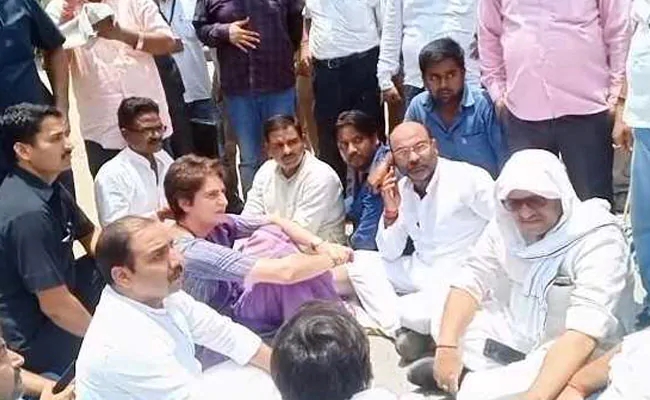 LUCKNOW: Priyanka Gandhi Vadra was stopped in Uttar Pradesh on Friday on her way to a village in Sonbhadra, where 10 people were killed in a shootout on Wednesday over a land dispute. The Congress General Secretary has targeted the state’s BJP government and Chief Minister Yogi Adityanath on what she calls rising crime and lawlessness in UP.

Priyanka Gandhi, the Congress in-charge of eastern UP, was seen in visuals sitting by the roadside in Mirzapur near Sonbhadra, surrounded by her security and Congress workers.

“I only want to meet the affected families, whose members have been mercilessly shot dead. A boy of my son’s age was shot at and is lying in the hospital. Tell me on what legal basis I am stopped here,” Priyanka Gandhi told reporters.

Just before her visit, reports emerged that gatherings had been banned at Sonbhadra.

The Congress general secretary said she had been told she can’t drive from Varanasi to Sonbhadra. “I am sitting peacefully, can someone please show me the order,” she said.

Priyanka Gandhi had landed this morning at Varanasi, the constituency of Prime Minister Narendra Modi, where she went to the hospital to visit those wounded in the Sonbhadra massacre.

Ten persons were killed and over 24 injured in the shooting which took place over a piece of land between the Gujjar and Gond communities.