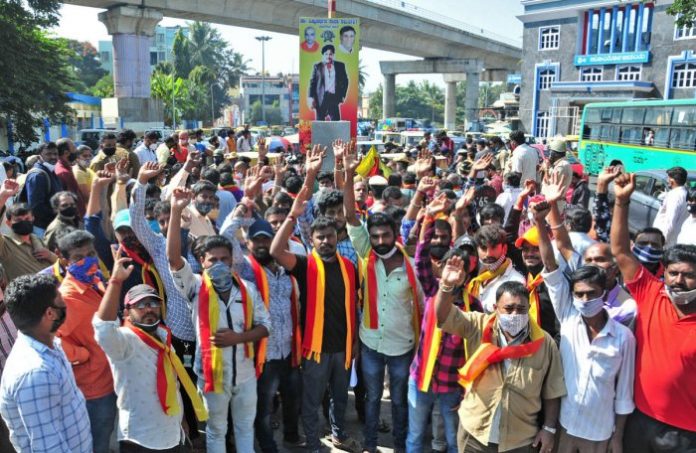 Bengaluru:  Angry fans of Kannada actor Vishnuvardhan staged a protest on Saturday over vandalisation of a bust of the late actor at the Balagangadharanatha Swamiji circle on Magadi highway in West Bengaluru.

Umesh Shety, one of the actor’s fans informed the media that he had found the bust vandalised on Saturday morning.

“There was a pressure on us to relocate the statue to a close-by place and we had agreed to it. However vandalising the bust like that is extraordinarily unwarranted and the police commissioner must take cognisance of such act and send the culprits behind the bars,” he said.

A resident of this nearby locality said that for many days a section of people were objecting to actor’s statue being installed here as for some people they wanted to dedicate this junction to have statue of Balagangadharanatha Swamji, who belongs to Vokkaliga community, there.

Kannada super star, Darshan demanded that the police should take action against such miscreants who are upto disrupt peace in the society.

“He’d lives in our hearts. He was a legend. None has the right to insult our legends this manner. I oppose and demand the police to take action against miscreants,” he tweeted.

Karnataka Housing Minister V. Somanna who is also the local MLA, condemned the incident and said on condition that the actor’s followers have been prepared to relocate the statue, vandalising it within the midnight was uncalled for.

“We are going to speak to all sides and peacefully resolve the difficulty and reinstall Vishnuvardhan’s statue at one other location quickly,” he said.

It may be recalled that recently a Telugu film actor Vijay Rangaraju had spoken ill about the deceased actor in one of his interviews, to which the entire Kannada film industry had taken serious note of it and demanded an unconditional apology from him.

Realising that his interview had snowballed into controversy Rangaraju had later tendered his apology to Vishnuvardhan’s fans.