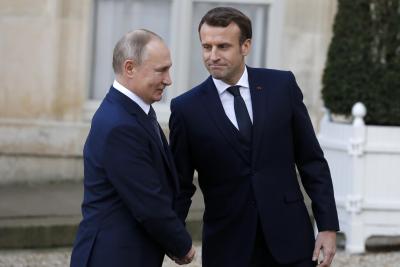 Moscow: Russian President Vladimir Putin and his French counterpart Emmanuel Macron held a phone conversation during which they discussed about the upcoming trilateral meeting of leaders of Russia, Azerbaijan and Armenia over the Nagorno-Karabakh region, the Kremlin said.

During the call on Sunday, Macron expressed support for Russia’s efforts to end the conflict the region claimed by both Armenia and Azerbaijan, Xinhua news agency quoted the Kremlin as saying.

According to another statement published by the Kremlin also on Sunday, during the trilateral meeting special attention will be paid to providing assistance to residents affected by the hostilities as well as to resuming and developing trade and economic relations.

They plan to review the implementation of the November 9, 2020, statement of the three leaders on Nagorno-Karabakh and discuss steps to resolve the regional issues, according to the Kremlin press service.

On November 9, Putin, Aliyev and Pashinyan signed a joint statement on a complete ceasefire, the fourth of its kind, in Nagorno-Karabakh starting from the next day, TASS News Agency said in a report.

Putin had said the Azerbaijani and Armenian sides would maintain the positions that they had held and Russian peacekeepers would be deployed to the region.

The three other ceasefires — two brokered by Russia (October 10, 17) and one by the US (October 26) — collapsed after Armenia and Azerbaijan traded accusations and attacks.

A new round of armed conflict broke out on September 27 along the contact line of the disputed Nagorno-Karabakh region, which is internationally recognised as part of Azerbaijan but mostly governed by the Republic of Artsakh, a de facto independent state with an Armenian ethnic majority.

Armenia and Azerbaijan went to war over the region in 1988-94, eventually declaring a ceasefire.

However, a settlement was never reached.