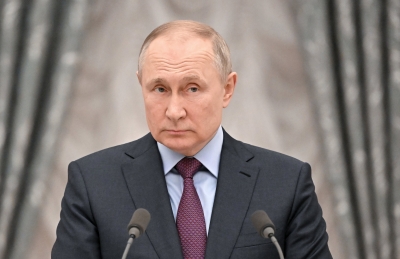 Moscow: Russian President Vladimir Putin has signed a decree to strengthen measures for protecting transport crossing through the Kerch Strait, the power grid connecting Crimea and the main gas pipeline to the peninsula.

Putin authorised the Russian Federal Security Service to organise and coordinate measures to effectively protect these facilities, Xinhua news agency reported, citing the decree published on Saturday by the Kremlin.

Earlier on Saturday, a deadly blast hit the 19-km Crimean Bridge, which consists of two parallel routes for automobiles and trains over the Kerch Strait.

A truck exploded on the road bridge, causing seven fuel tanks of a train heading to the Crimean Peninsula to catch fire. Three people were killed in the blast, which also led to the partial collapse of two spans of the road bridge.

Traffic has reopened to cars and buses with a full inspection procedure needed, while trucks are still required to cross the Kerch Strait by ferry, Crimea’s head Sergei Aksyonov said.

Meanwhile, the railway service on the bridge has been fully restored and all scheduled trains, both for passengers and freight, will be able to cross the viaduct, Russian Deputy Prime Minister Marat Khusnullin said on late Saturday.