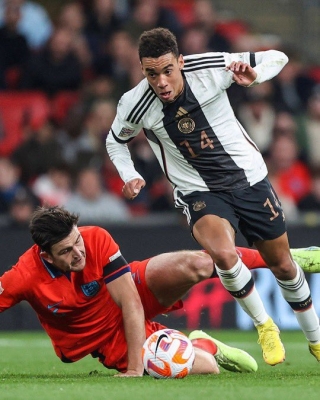 B0erlin (Germany): Two months ahead of the 2022 FIFA World Cup in Qatar, the number of admirers seems to inevitably grow when it comes to Jamal Musiala.

“He is a must for the starting eleven when performing in that way,” the 70-year-old Hoeness said after Germany’s 3-3 draw against England in the Nations League delivered additional compelling arguments.

For a reason, the struggling 2014 world champions’ hopes seem pinned on the England-bred youngster, who made his decision to play in the German shirt after games in the Three Lions youth teams.

The former Southampton and Chelsea talent turned into Germany’s driving force on the Wembley pitch, leaving the crowd behind in astonishment.

Flick’s lineup against England might stand for a turning point in the German team.

The Stuttgart-born but mostly England-raised striker outpaced the icon and 118 times capped Thomas Muller when battling for the job behind the front-line. reports Xinhua.

Around 57 days before Germany’s World Cup curtain-raiser against Japan, Musiala helped secure a last-minute draw after Flick’s team had gambled away a 2-0 lead.

Flick praised Musiala’s contribution as he increased the team’s speed and turned into an inspiring source being involved in all three German goals.

According to Hoeness, Musiala has made a significant step at Wembley as he “managed to survive enormous pressure” triggered in advance of the duel.

“He has shown he is an outstanding talent,” Flick said, adding that “He is helping us upfront and when it comes to his defensive performance.”

As a fact, Musiala covered all sectors from a genius conductor to a robust fighter. “He is opening spaces for us against solid lines,” Flick said.

Not only the on-pitch performance is documenting Musiala’s stunning upswing.

Online portal TransferMarkt rated him as the most valuable German player in domestic league worth 80 million euros in their latest ranking.

There seems more to come for the genius as many expect the 2022 World Cup to open doors into a new dimension.

“It can be the suitable stage for him turning into one of football’s superstars,” former German international Stefan Effenberg said.