Mangaluru: We may not think about them very often, but we put a lot of trust in our brakes. Brakes of our vehicles are one of the first lines of defense against accidents. However, like every mechanical system, brakes aren’t perfect. Under the best of conditions, brakes have a limited lifespan. Over time, they wear out and stop working. Worse, sometimes brakes are poorly designed or have a manufacturing defect and don’t function properly at all. That’s a scary thing to consider – how big a risk is brake failure? Brakes can fail at any point in that process. The most common cause of failure is a leak in the brake lines. The brake fluid will slowly drain out, until there isn’t enough left to transmit the pressure from the pedal to the tires. The brakes can also fail when the discs or drums wear out, so they can no longer put enough friction on the wheels to stop them. Other mechanical issues within the system may also arise, but are less common. But in today’s incident of brake failure of a bus, luckily did not result in any public damage or any other severe consequences. It was around 11 am on Saturday, 2 January 2021, a KSRTC City Bus bearing Registration number KA 42 F 1918 plying from State Bank towards Katipalla after making a stop at Lady Hill Bus shelter going towards Urwa Store, going a few yards showed signs of brake failure. Luckily the bus was slow since it just moved after the stop at the bus shelter. The driver alerted the public and street vendors nearby about the brake failure and asked for help in stopping the bus, whichever way they could.

The driver of the bus wanted to move the bus sideways from the main road so it could stop near the raised footpath, but since they were vehicles parked, he was helpless. The public, including the conductors from other city buses quickly tried to stop the bus by using interlock bricks, but it was not useful during first two attempts-then after using the tyre stopper from the KSRTC bus and also using bricks, they were able to stop the brake failed bus moving forward, right in the middle of the road, which resulted in traffic jam for a while. But luckily with the quick help of the public, an anticipated disaster was prevented. And luckily the bus was moving very slow. Just imagine what would have happened if the bus was speeding and brakes failed? 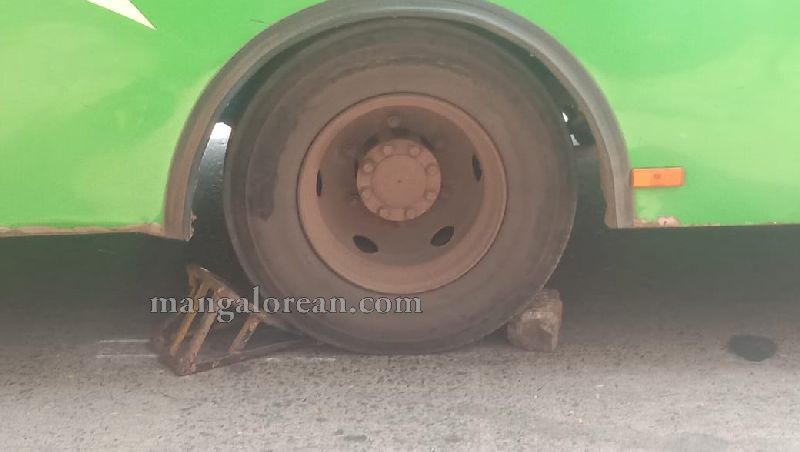 A mechanic who quickly arrived at the spot to fix the brakes said, ” Disadvantages of hydraulics occur when you get a leak such as hole in a hose or blown seal. They are less “field serviceable” than cables, essentially the brake is rendered useless and unrepairable (in the field) by a minor fault – which fortunately happens very rarely, and usually caused by poor transport rather than while out riding. Another reported problem with hydraulics is boiling of fluid. With overheated fluid initially the pressure in the system stops the fluid boiling. When the brake is released (even for a moment), the pressure comes off and fluid boils, and the brakes no longer work – at all – the lever just goes all the way in. Brake failure in vehicles having such brakes happen quickly”. Anyways, good news is that this incident of bus brake failure did not result in any damages or physical injuries or deaths.