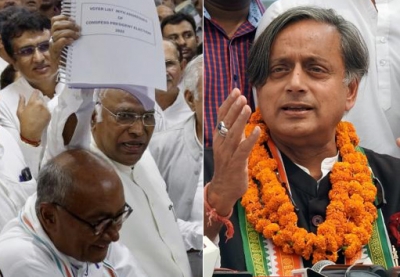 New Delhi: The Congress will witness a contest for the party president’s post between Mallikarjun Kharge and Shashi Tharoor, both having filed their nominations on Friday. However, with senior leaders siding with Kharge and the Congress G-23 group too endorsing his candidature, it leaves fellow member Tharoor to fend for himself.

The G-23 leaders are the main proposers of Mallikarjun Kharge along with Rajasthan Chief Minister Ashok Gehlot for the Congress presidential poll. Digvijaya Singh who also collected the nomination papers for himself ended up becoming a proposer for Kharge. He is tipped to become the Leader of Opposition in the Upper House when Kharge vacates the position after being elected Congress president.

In the set of nominations, the names of the proposers include Anand Sharma, Bhupinder Singh Hooda, Prithviraj Chavan, Akhilesh Prasad Singh, Mukul Wasnik and Manish Tewari, who were in the G-23. Others who signed the nomination papers include Ashok Gehlot, who opted out of the race on Thursday after meeting Congress interim president Sonia Gandhi.

Almost all the G-23 leaders were present at the Congress headquarters at the time of Kharge’s filing of nomination, signalling an end to the stalemate since 2020 when the group wrote a letter demanding elections in the party. The group, however, has not come out in support of Shashi Tharoor who was part of it.

Gehlot, who was initially the frontrunner, opted out after Sunday’s fiasco in Jaipur where MLAs loyal to him boycotted the CLP. Gehlot’s supporters demanded that the issue of Chief Minister should be decided after October 19 but Congress state in-charge Ajay Maken wanted a one line resolution.

Ashok Gehlot opted out and said, “In this circumstances I don’t want to contest and the issue of chief ministership will be decided by the party high command. Whether I remain the CM will be decided by Madam (Sonia Gandhi)… I am a loyal soldier of the Congress from Indiraji’s time. I have expressed regret and sadness over whatever happened in Jaipur.”

Earlier, while entering Sonia Gandhi’s residence at 10 Janpath, Gehlot was seen carrying a set of papers. On one of the papers, it was written “Whatever has happened is sad and I am also hurt.”

“I have always acted as a loyal soldier of the party. The incident that happened on the day of the legislature party meeting has left everyone shaken. It gave a message as if I wanted to continue as the Chief Minister, so I apologised to her,” Gehlot said after the meeting.

In Rajasthan, amid the full blown controversy, the Congress has had to issue gag orders against making public statements. The Congress on Tuesday served show-cause notices to Rajasthan Parliamentary Affairs Minister Shanti Dhariwal, party chief whip Mahesh Joshi and RTDC chairman Dharmendra Rathore for holding a parallel meeting of party legislators in Jaipur.

The notice issued to Dhariwal said that he, being the Parliamentary Affairs Minister, has committed “grave indiscipline” by hosting a parallel MLAs meeting at his residence and thus “pressuring MLAs not to attend the official meeting”.

“As Parliamentary Affairs Minister, hosting the unofficial meeting confused the Congress MLAs as to which one was convened officially,” the notice reads.

The notice that has sought a response within 10 days also noted that Dhariwal’s action (parallel meeting) came even when senior party leader Mallikarjun Kharge and Rajasthan in-charge Ajay Maken repeatedly clarified that they have come to speak to each MLA “individually and impartially” and report to Congress chief Sonia Gandhi.

Similarly, the notice addressed to Joshi stated that he, as Chief Whip, has conducted “grave indiscipline” by boycotting the official CLP (Congress Legislature Party) meeting and by participating in and convening a parallel meeting of the MLAs at the time when the officially appointed observers were waiting for the official meeting to start.

“As Chief Whip your presence at the unofficial and illegal meeting confused the MLAs as to which one was convened officially,” added the notice.

In the show-cause notice to Rathore, he was accused of making all the logistical arrangements and was held responsible for being behind the entire planning of the unofficial meeting of the MLAs.

Maken has recommended disciplinary action against Dhariwal, Joshi and Rathore whom he blamed for holding the parallel meet.

Maken, in his report to the party president, has reported “grave indiscipline” on their part. Rajasthan Chief Minister Ashok Gehlot, sources said, has been exonerated in the report submitted to Sonia Gandhi.

The official meeting of the Congress Legislature Party was to be held at 7 p.m. on Sunday at the Chief Minister’s residence in Jaipur, but before that Gehlot’s loyalists gathered at Dhariwal’s residence. From there, they went to Speaker C.P. Joshi’s residence and collectively submitted their resignations to him.

The other contender for the Chief Minister’s post, Sachin Pilot on Thursday met Sonia Gandhi and said that everyone has to work together for the party to come back to power in 2023.