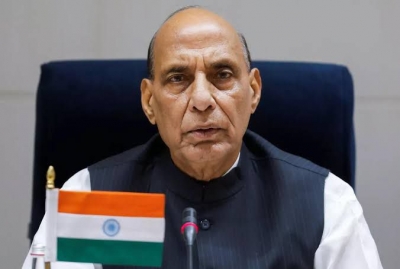 “Make new investments, put more emphasis on research & development, and harness its full potential to take the Indian defence industry to new heights. This effort of yours will be very important not only for the defence industry, but also for the overall growth of the entire country,” said Singh while addressing the 117th Annual session of PHD Chamber of Commerce & Industry (PHD-CCI) here.

The minister said that PHD-CCI being one of the oldest industry associations having many national and international members could act as ambassador of the Indian defence industry.

“Your roots are spread far and wide in the country and abroad. You can fulfil your role by communicating with all the domestic and foreign companies, connecting them with the Indian defence industry and acting as a bridge between these two,” he said.

The Defence Minister said that the government has removed these bottlenecks and played the role of an incubator, catalyst, consumer and facilitator in the case of private industry.

Several steps have been taken by the Ministry of Defence, under the ‘Make in India’ and ‘Self-reliant India’ initiatives of the Government, to change the old traditions, and to create a manufacturing climate, in which the public and private sectors could participate.

Elaborating upon the far-reaching reforms undertaken by the MoD to bolster the private sector participation in defence sector, he said that Government labs opened to the private industry, transferred technology at zero fee, provided access to test facilities, and upfront funding through DRDO was provisioned.

The Ministry of Defence has issued 3 positive indigenization lists of 309 items which will be procured from domestic vendors as per norms. Three lists have also been issued by Defence Public Sector Undertakings (DPSU), in which more than 3,700 are Line Replacement Units, Sub-systems and other Components. In addition, an iDEX initiative has been launched to encourage innovators and start-ups.

The government has taken several steps like introduction of defence industrial corridors– two industrial corridors have been set up each in Uttar Pradesh and Tamil Nadu, corporatization of OFB which creates win-win situation for armed forces, industry, start-ups and innovators, the minister said.

“The magnitude of all these efforts is beginning to come before us. Today we are not only producing to meet our own defence needs, but also fulfilling the defence needs of many other countries under ‘Make for the World”, underlined defence minister in his speech.