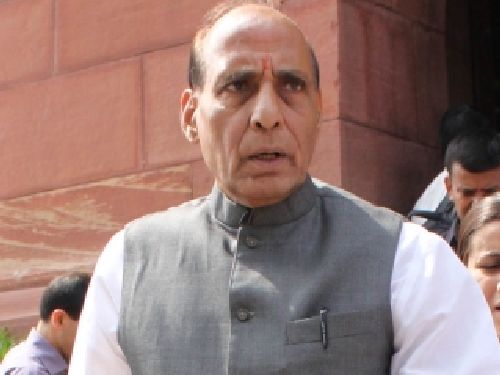 Panaji:  Union Defence Minister Rajnath Singh on Tuesday met his Defence Ministry colleague MoS Shripad Naik, who has been admitted to a Goa hospital following a road accident in Karnataka late on Monday.

Singh briefly met Naik at the Goa Medical College campus to enquire after his health and to condole the death of the Union MoS’s wife Vijaya, before leaving for the national capital.

Earlier on Tuesday, Chief Minister Pramod Sawant said that Naik’s condition is “stable” and he’s responding well to treatment after two orthopaedic operations in the early hours of Tuesday.

“I have met Bhau (Naik). His condition is stable now. The two orthopaedic surgeries conducted on him were successful,” Sawant told reporters shortly after meeting Naik at the hospital’s coronary care unit.

“The operations started around 2.30 am and lasted till around 7 am. He is now under sedation. He is responding well to treatment,” Sawant said.

Sawant said that Defence Minister Rajnath Singh will arrive here later in the day to ask after the health of Naik, who was injured in a road mishap in Karnataka late on Monday.

“We will take a call on whether we need expert opinion. Rajnath Singh will also meet with doctors later today to review Naik’s health,” Sawant said.

Naik’s wife Vijaya and his Personal Secretary Deepak Ghume had succumbed to their injuries, while his driver and a Personal Security Officer are currently admitted at the Goa Medical College near Panaji.

The Chief Minister said that hours after Naik was rushed from the accident site in Yellapur in Karnataka to the Goa Medical College on Monday night, two surgeries were conducted.

Apart from loss of blood and dropping blood pressure, Naik had a broken upper limb and a fractured thigh bone.

Late on Monday, Prime Minister Narendra Modi also spoke to Sawant and directed him to ensure the best treatment for Naik, a fifth-term MP from North Goa and a former state BJP President.