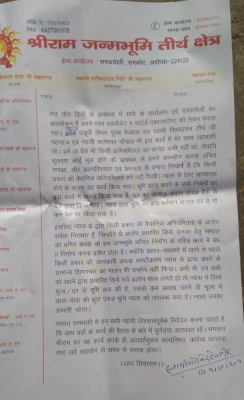 Ayodhya (UP): The Shri Ram Janambhoomi Teertha Kshetra Trust has given a clean chit to trustees involved in the purchase of land for the temple project.

Talking to reporters at a press conference here on Thursday, Swami Govind Dev Giri, treasurer of the trust, said that he had studied all relevant documents in the past three days and found no discrepancy in the land deals.

He said that Swami Vishwaprasann Teerth and Kameshwar Chaupal had scrutinised all documents with him.

“All allegations levelled in the land purchase are false and baseless. If those who have levelled allegations can help us in getting cheaper land at the same location, the Trust would be obliged to them,” he said.

Swami Govind Dev Giri further said that the campaign against the Trust was unfortunate.

“However, I want to assure that the work on the Shri Ram temple will continue with full honesty and transparency,” he said.

The Swami’s statement now brings the curtain down on the controversy over the alleged land scam in Ayodhya.