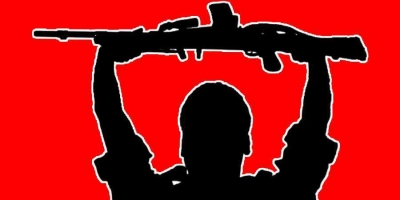 Hyderabad: Disenchanted with the Maoist ideology, an extremist who was born to a top leader of the banned outfit in Dandakarnya forest, surrendered before Telangana police chief on Wednesday.

Ravula Ranjith alias Srikanth was born and brought up in the thick of Maoist ideology. However, he said he has realized that under the current circumstances, there are no grounds for the armed outfit to pursue the revolutionary movement in the light of digital revolution coupled with the welfare-oriented and people-friendly policies of the government.

Realizing the futility of the ideals of Communist Party of India (Maoist) he gave up arms before Director General of Police M. Mahender Reddy.

After the death of his father last year, he realized the futility of continuing in the outlawed Maoist outfit and attracted by the provisions of comprehensive surrender and rehabilitation policies of Telangana Government, he decided to leave the party to join mainstream.

The DGP handed over a demand draft of Rs 4 lakh towards his rehabilitation and Rs 5,000 for immediate expenses.

Ranjith was born in 1998 in Dandakaranya forest and brought up in South Bastar division of Chhattisgarh.

Since his childhood he was groomed in revolutionary ideology and waging war against the State with an objective of establishing New Democratic Revolution (NDR) through the barrel of gun.

He studied from Class 1 to Class 6 in the CPI (Maoist) established Janatana Sarkar School at Puttapadu area in Chhattisgarh, where he was indoctrinated with the revolutionary ideology from his childhood.

His father got him admitted in Kakatiya School, Nizamabad on the name of R. Srikanth son of Srinu, where he studied up to Class 10

After competing Class 10, he joined underground armed formations. After Nagesh was killed in an exchange of fire in 2015, Ramanna decided not to send his son outside.

Ranjith educated the tribals of Dandakaranya forest area on the need to advance the New Democratic Revolution (NDR) and was instrumental in propagating the ideology of CPI (Maoist) along with his father from April 2015 to November 2017.

On the advice of his father he joined in CPI (Maoist) Battalion in November 2017 and worked in 2nd Platoon of 1st Company as Party Member. In 2019,he got elevated as Platoon Party Committee (PPC) Member.

He told police that after his father died of ill-health in August 2020, Katta Ramchandra Reddy, CCM succeeded as Secretary of DKSZC.

Ranjith, who faced humiliation in the party after the death of his father, realized that there is no relevance and acceptance for the movement in today’s context. He appealed to the Maoist cadres to give up arms and join the mainstream.

He confirmed that Yapa Narayana, CCM and Secretary, Telangana State Committee died as a result of contracting Covid-19 and due to lack of proper treatment in the jungles.

According to DGP, Ranjith participated in four brutal attacks on security forces and one ambush in addition to several other incidents during his underground life.

He also took part in Minapa attack in 2020, wherein 23 Security personnel and 3 party cadre died in an ambush by the Maoists and the party snatched12 AK-47 and 2 Insas rifles from security forces.

The DGP appealed to the Moist cadres to join the mainstream and take part in the advancement of the nation through constructive participation and benefit from the rehabilitation process of Telangana State which includes immediate relief with suitable amount and other support measures.