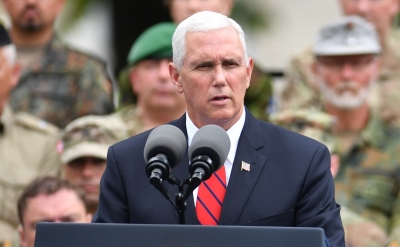 Republicans sue Pence in bid to overturn US election results

Washington: In a far-fetched bid to overturn the result of the US election, House Representative Louie Gohmert and other fellow Republicans have sued Vice President Mike Pence, who will preside over the upcoming congressional meeting that will finalize Democratic President-elect Joe Biden’s victory.

The lawsuit, which was joined by Arizona Republican Party chair Kelli Ward and others on Monday, focused on Pence’s official capacity as vice president, who the 1887 Electoral Count Act dictates should preside over the largely ceremonial January 6 meeting of Congress to count the Electoral votes and finalize Biden’s win over incumbent President Donald Trump, Xinhua news agency reported.

The litigation asked Texas-based federal judge Jeremy Kernodle to grant Pence the “exclusive authority and sole discretion” to decide which electoral votes from a given state should be counted.

It argued that the Electoral Count Act violated the 12th Amendment of the US Constitution, which stipulated that “the President of the Senate shall, in the presence of the Senate and House of Representatives, open all the certificates and the votes shall then be counted”.

In the US, the vice president also serves as the president of the Senate.

When electors across the states cast their Electoral College votes on December 14 to elect Biden for president, Republican “electors” in states like Arizona cast their own votes for Trump in a bid to disrupt the electoral process.

The lawsuit urged Pence to recognize those pro-Trump votes rather than the actual Democratic votes.

“That, with respect to competing slates of electors from the State of Arizona or other Contested States, the Twelfth Amendment contains the exclusive dispute resolution mechanisms, namely, that (i) Vice-President Pence determines which slate of electors’ votes count, or neither, for that State,” the lawsuit said.

Law experts by and large believed there’s little chance for the lawsuit to achieve what it wanted, with Harvard Law School professor Laurence Tribe on Twitter calling it “the dumbest lawsuit of all.”