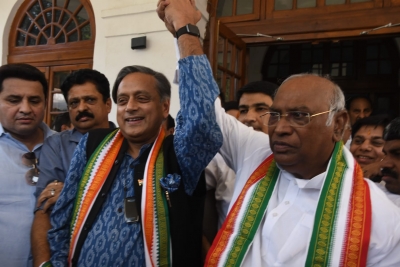 Revival of Congress has begun: Tharoor

New Delhi: Runner-up in the Congress president poll, Shashi Tharoor on Wednesday thanked his supporters, and said that the elections will galvanise the party and its revival has begun.

“I have always expressed the view that these elections, irrespective of the outcome, must ultimately strengthen the party. It gives me immense personal satisfaction that this has clearly been the case. Our democratic contest has galvanised vibrancy at all levels and has prompted a healthy and constructive discussion on change, which I believe will serve the party in good stead in the future,” he wrote in a letter.

He thanked his volunteer team of party colleagues “for their amazing efforts against impossible odds to keep our campaign going and congratulated the Chief Election Authority, Madhusudan Mistry, and his colleagues for their efforts to make this possible.”

“It is our duty to lead the nation to the bright democratic future envisaged by the founders of our Republic. The ideals of a pluralist, prosperous and egalitarian India that inspired Mahatma Gandhi, Nehruji and Dr Ambedkar must be fought for with renewed determination in the face of the onslaught on our most precious values by the ruling party and the forces it has unleashed,” he added.

Tharoor said he looks forward to working with the Congress colleagues to face the challenges ahead.

“I believe the revival of our party has truly begun today,” Tharoor said after losing to Mallikarjun Kharge.