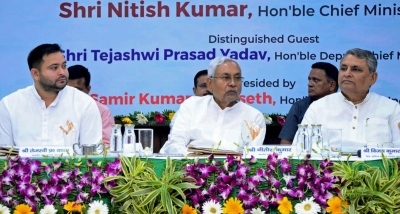 Patna: Rashtriya Janata Dal state president Jagadanand Singh on Thursday claimed that Tejashwi Yadav will become the chief minister in 2023 and Nitish Kumar will go to the Centre.

Jagadanand Singh, who is said to be very close to former CM Lalu Prasad, said: “Whatever Nitish Kumar had announced, I believe that he will fight for the country after the end of 2022 and will hand over the future of Bihar to Tejashwi Yadav in 2023.”

“The post of chief minister is the highest in the state and Tejashwi will take it further. The country is waiting for Nitish Kumar and the people of Bihar are waiting for Tejashwi Yadav,” Singh said.

Lalu Prasad had said the same thing in Delhi on Tuesday. He said that he wants to see Tejashwi Yadav as the chief minister of Bihar.

Following the statement of Jagadanand Singh, the dealings between Chief Minister Nitish Kumar and Deputy CM Tejashwi Yadav are coming into the public domain. The RJD has 79 MLAs and the JD-U 45.

Earlier on Tuesday, Nitish Kumar, during a state government event, pronounced the post of chief minister for Tejashwi Yadav. It has led to speculation whether it was a slip of the tongue by Nitish Kumar or he deliberately said it.

Now, it will be interesting to see how the JD-U reacts to it.