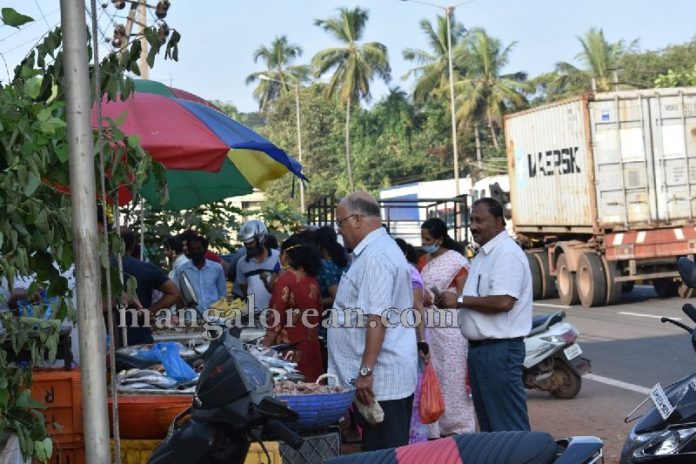 Mangaluru: The problems caused by hawkers in the City never ends, where we have all kinds of street vendors selling vegetables, fruits, mobile accessories, tender coconuts etc- and apart from them, now we have a bunch of street-side FISH SELLERS? The roads near the markets have become so narrow that long traffic jams are an everyday affair now. There is no space even for pedestrians in market places. All footpaths have been illegally occupied by vendors. Students face lots of troubles while commuting to school. Apart from that, this encroachment causes traffic jams also, and due to traffic jams, People’s health is also under attack from the pollution caused by these vehicles. Also, some of these hawkers usually sell unhygienic and low-quality foodstuff posing danger to the health of the students. 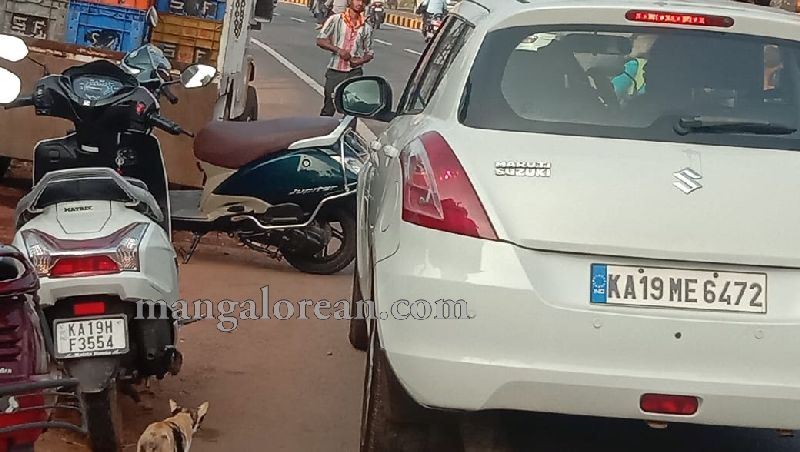 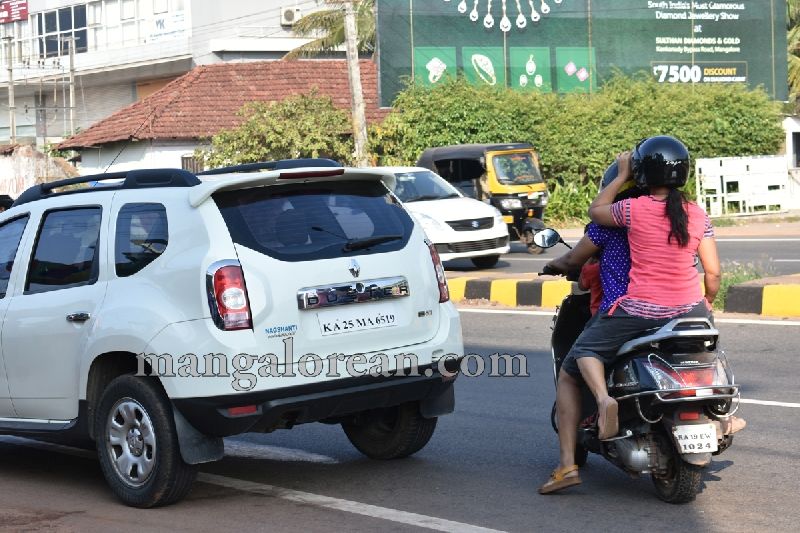 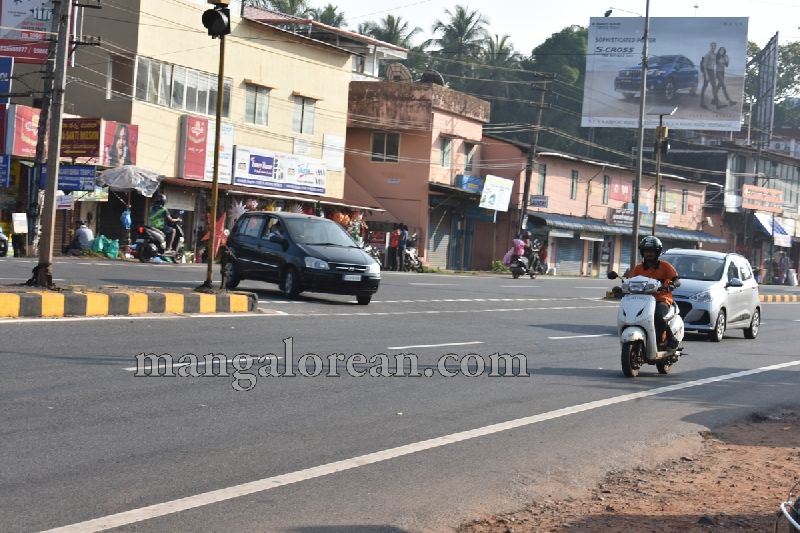 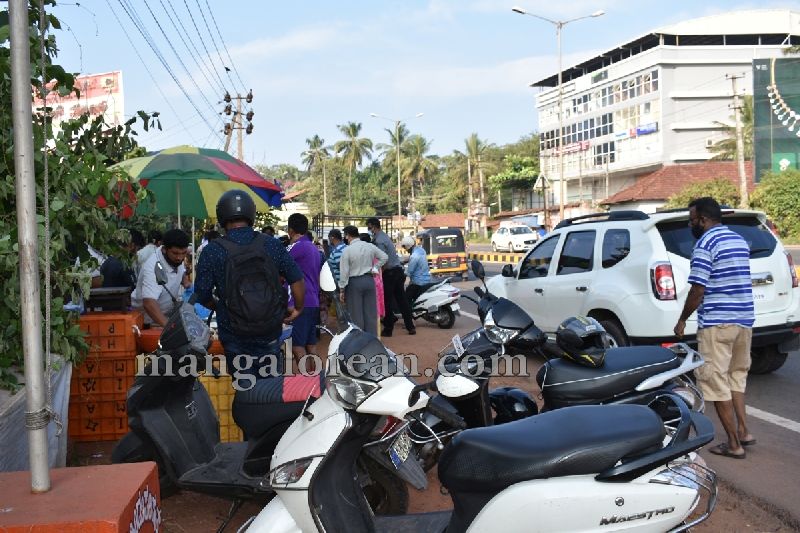 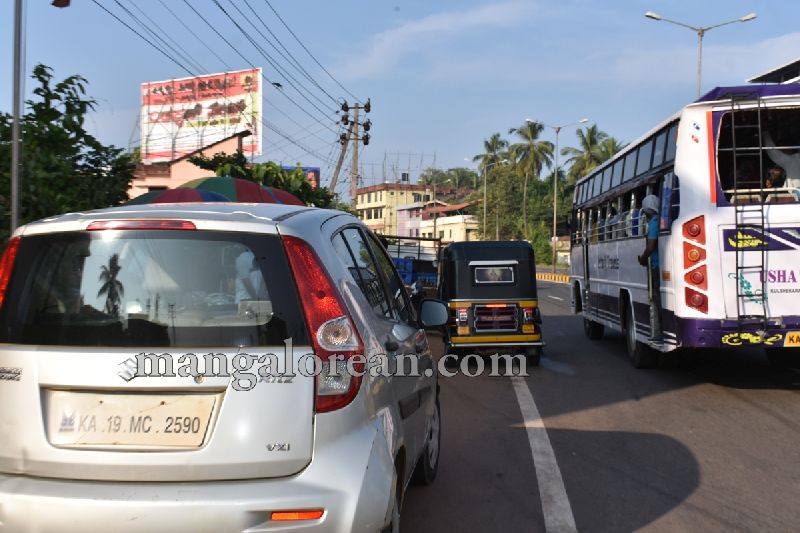 And one such roadside fish vendors are located in between Nanthoor Junction and Bikkarnakatta Road, who are creating a nuisance to motorists and pedestrians since their customers are parking their vehicles haphazardly. These fish vendors were once vacated by MCC and Traffic cops, and after a few months, they are back again to create a nuisance. I am not against the street vendors, because they also need to make a living, but they should realize before setting up their make-shifts shops, their roadside business doesn’t cause inconveniences to the public. Just look at the photos in the report, and you’ll know what I am talking about. Especially on Sundays, when people after mass come to buy fish at these vendors, it is much worse, with the vehicles parked haphazardly- and pedestrians have to use the main streets to walk, thereby putting their lives in risk.

Team Mangalorean had received a bunch of complaints about this issue, where they have been facing inconveniences due to the illegal parking in front of these roadside stalls. A doctor working at a reputed institution taking his daily route from his house in Shakthinagar and to his workplace in the City speaking to Team Mangalorean said, “I have been always facing this traffic jam problem during peak hours, since after you exit from Shakthinagar road and make a right turn into road going towards Nanthur, the traffic always gets jammed up, due to vehicles parked in front of these fish vendors stalls. It is surprising that the traffic police have turned a blind eye towards this issue, and also the MCC too has not taken any action. Hope this report highlighting the problem will bring an end to this nuisance”. 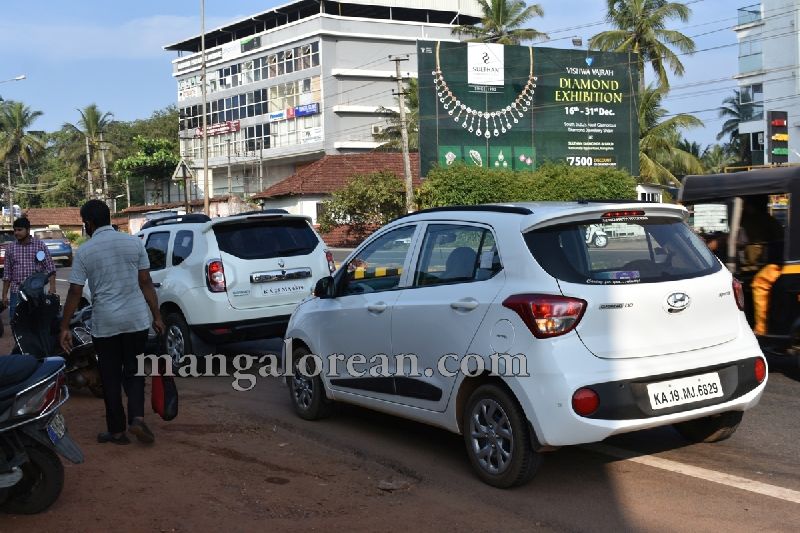 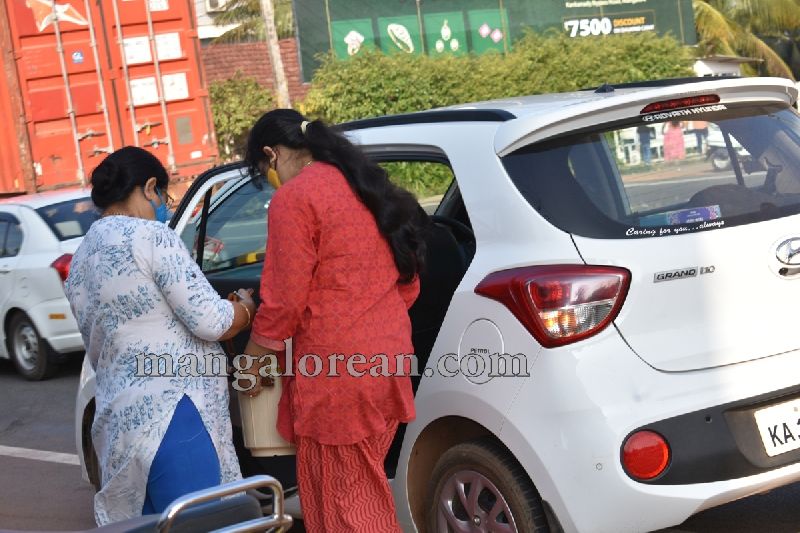 Ms Shanthi Kumar, working at an IT firm says, “Every day between 8:00 to 8:30 am when I head to my workplace in Balmatta from Kulshekar, there is always traffic chaos near these street-side fish vendors area, due to the haphazard parking of vehicles by their clients. And these vehicle owners don’t even think before they park their vehicles obstructing the movement of traffic on that stretch of the road. I only hope the concerned people in the administration, MCC and traffic police will do the needful and end this nuisance to the public”.

Seems like MCC is trying to take advantage of its position which is not viable. Earlier, whatever they implemented was never practised. It’s all politics at their level in which the big fish indulge. There is no cleanliness in markets or residential areas and stray dogs pose a danger. The vendors are enjoying liberty in setting up stalls wherever they want and allow the traffic to be halted in the process. Is this the character of a SMART CITY? The City Corporation should consist of intellectuals who are real policymakers as they are not media-savvy. The word election means drama and to hell with what you preach.

Hasty implementation of the Act clearly indicates vested interest with an eye on votes. Nothing surprising in it. It is happening everywhere in the country and that too when the government is committed to rooting out corruption, with no exemption even in Mangaluru. More important is to ensure that these street vendors do not indulge in illegal activities. The authorities should explain their action plan in this regard. The problem is that politicians will never take decisions which may affect their vote bank adversely. They will not implement the decision on eviction or will delay it to suit their requirements. Such decisions are only implemented through court orders. The street vendors are causing much inconvenience to commuters and are a hindrance to road traffic. 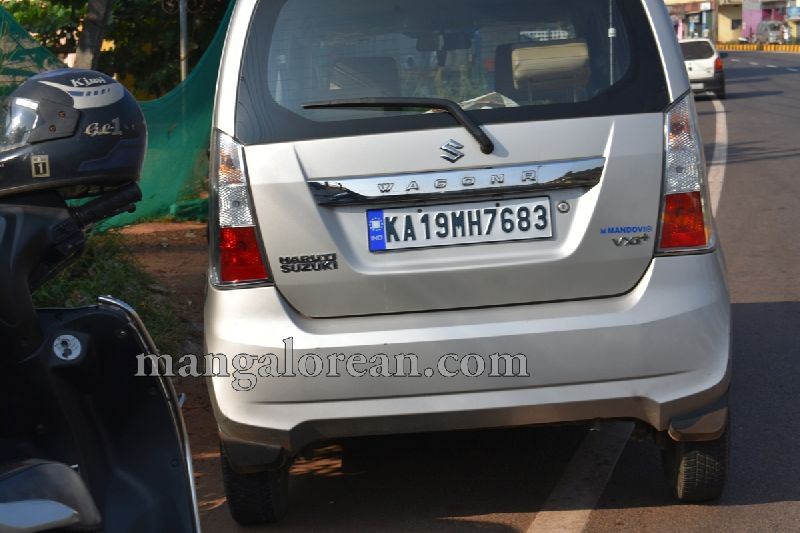 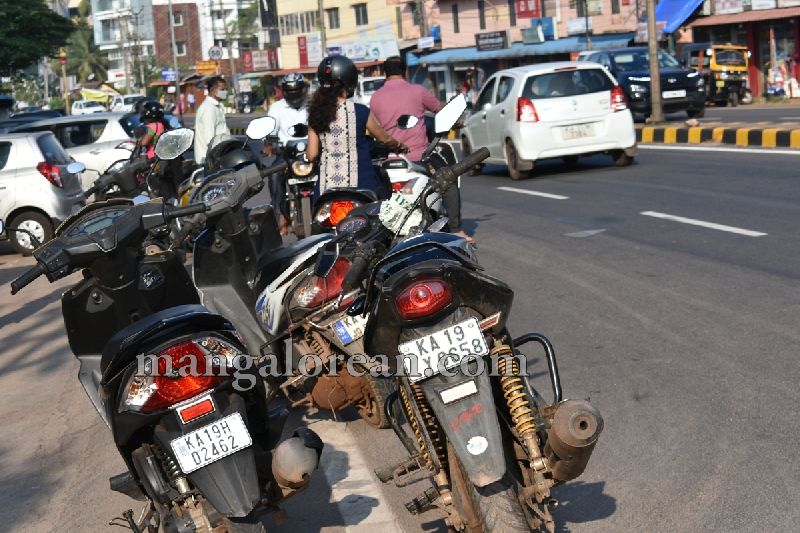 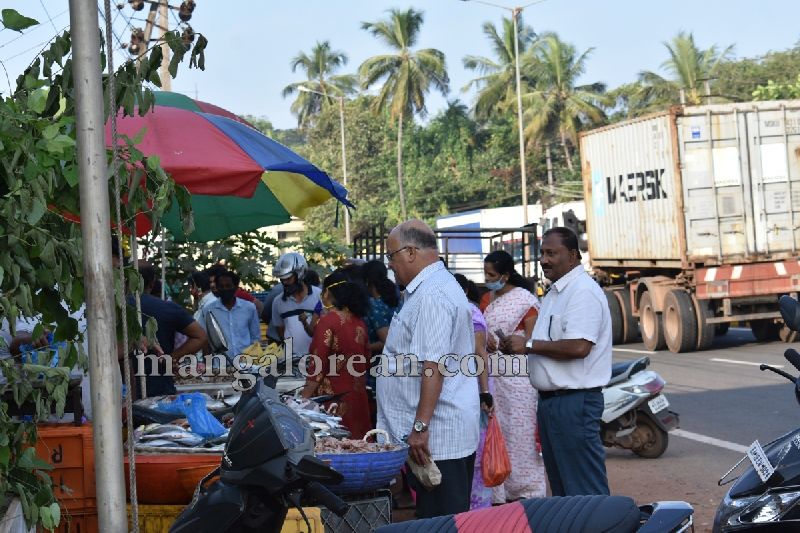 The street vendors throw muck all around and sometimes it becomes the source of pollution. The vendors not only cause inconvenience but also spoil the beauty of markets and roads. They need to be relocated once and for all without any political mileage and delay. The authorities must also ask the City corporation to explain the reason for not relocating the vendors as per the pre-decided dates. Don’t the netas realize that this is a SMART CITY and the problem of street vendors may go against it. Let us maintain the beauty of the planned city with specified rules and regulations without any political bias to garner votes.

It should be noted that the Street Vendors Act came into force in May 2014. Under the provisions of the Act, the civic authorities should have immediately constituted a vending committee to demarcate vending zones and apprised the vendors of the rules and regulations regarding their eligibility. By now, all the vendors of the city would have been rehabilitated. But that has not been done, and with PM Modi’s mercy on the street vendors to carry on with their trade, has put a BIG headache on MCC officials. While allowing street vendors to do business at various spots in the city, shopkeepers should also be allowed to use corridors and adjoining places to display their goods. But the MC must ensure that this arrangement will not fall in the way of the smart city proposal.

The Street Vendors Act, brought for the benefit of the public, needs to be implemented without wasting any time, but here it is the other way. Though too late, street vendors heaved a sigh of relief and the MCC eyed its own political advantages in allowing street vendors to run their business prior to elections without any problem. It is a clear game of deriving political advantage. The vendors have been doing their business for the past many years, and in the present situation, I would suggest that vendors should be allocated area-wise to carry on with the business.

At present, vendors are roaming in a particular area just like three-wheelers. It has also been observed in the past that the MCC was wasting money and time in getting the footpaths cleared of the markets, but the result is always nil. Implementation of the law is also lacking because of vote bank politics. I would suggest that before introducing any scheme, the local councillors should be consulted. Otherwise, the MCC will have to cut a sorry figure before the public. A Proper survey should be carried out to shortlist eligible vendors and a proper strategy formulated to settle them in a phased manner soon. And in conclusion, the roadside fish selling vendors near Bikkarnakatta have become a traffic hazard with customers parking their vehicles on the road, disrupting normal traffic. These fish vendors and other street vendors should be regulated keeping in view road safety and public inconvenience by the MCC and Police.