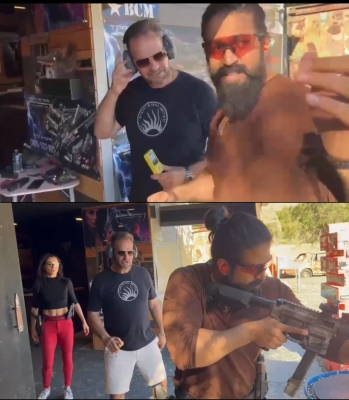 Bengaluru:  Everyone is curious to know about the next project of ‘KGF’ superstar Yash. Basking in the glory of the pan-India film’s success, Yash, after a long hiatus, has posted a video with a Hollywood director on his social media handle.

The video shows Yash practising shooting with Hollywood stunt director J.J. Perry and his team. The 24-second video of Yash has left his fans and cine lovers guessing about the future move of the Kannada superstar.

“There is always a way to reach the target, the challenge is to spot it!!! Thank you my man JJ Perry, what a fantastic day!!I Next time it’s gotta be Kalashnikov!!” Yash writes in the caption to the video.

The video had gone viral on social media, garnering 295K views and shared or retweeted by more than 4,000 viewers, when last checked.

Yash had not given details about his future project. Sources close to him, however, reveal that this might be a clue to his work with Hollywood action specialists.

They also say that Yash is all set to take the Indian film industry to Hollywood with his upcoming project. There’s been no official word, though, on this subject.