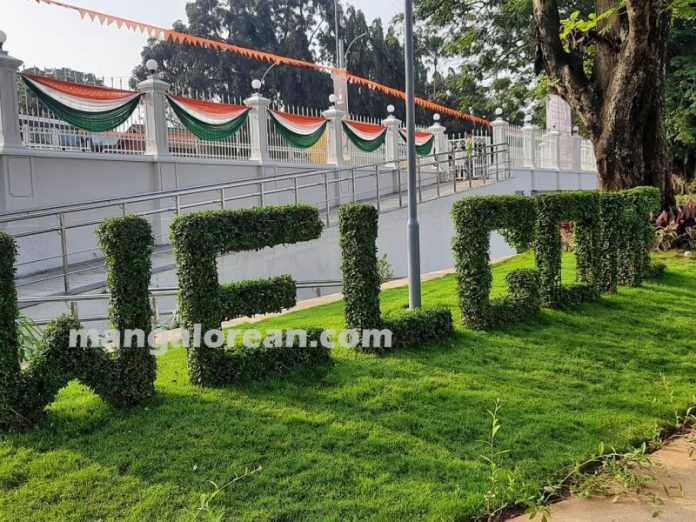 Mangaluru: The pedestrian underpass, which was under construction near the Clock Tower in the city for over TWO YEARS is finally completed and inaugurated today, Sunday 2 October 2022 on Gandhi Jayanti, for the convenience of people. The 10-meter-wide underpass, which was constructed as per the previous DPR to cross the Nehru Maidan Road is completed. The second phase of work in order to extend the length of the underpass, so that pedestrians may cross the Rao and Rao Circle-Clock Tower stretch of road is also done. 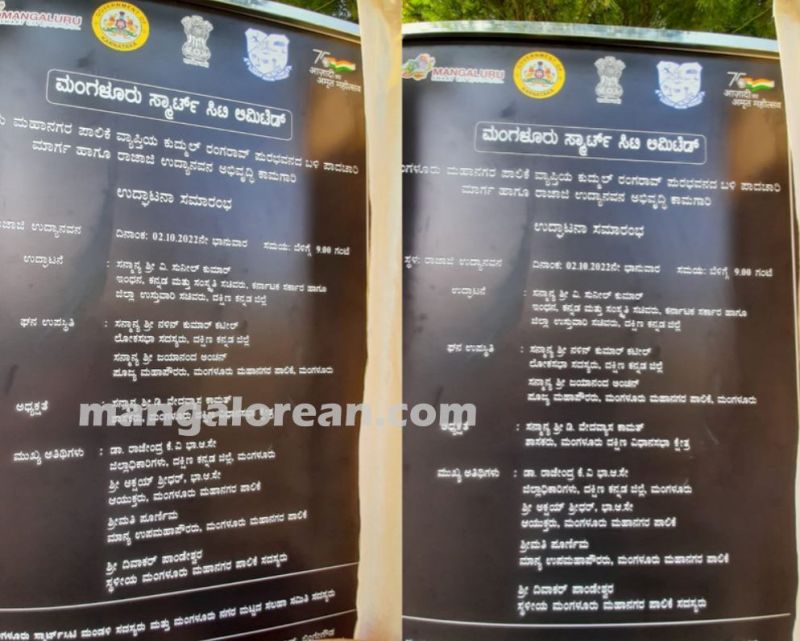 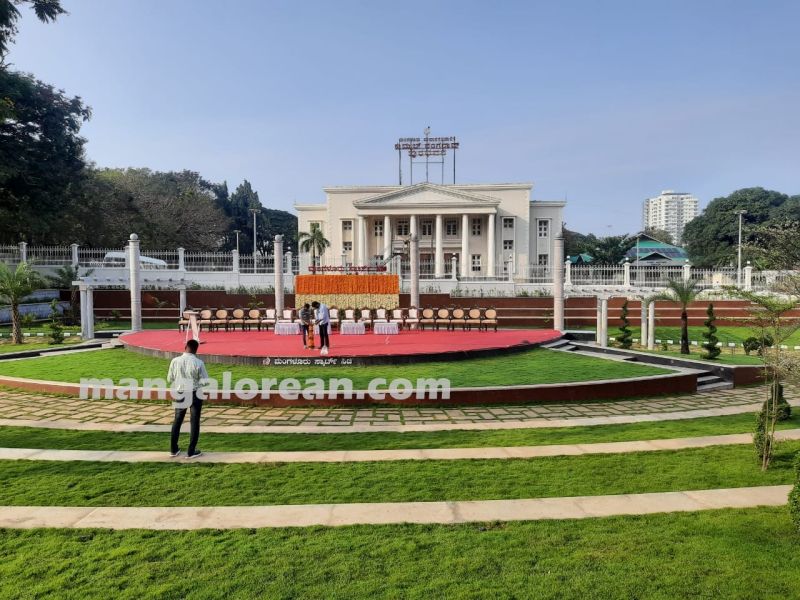 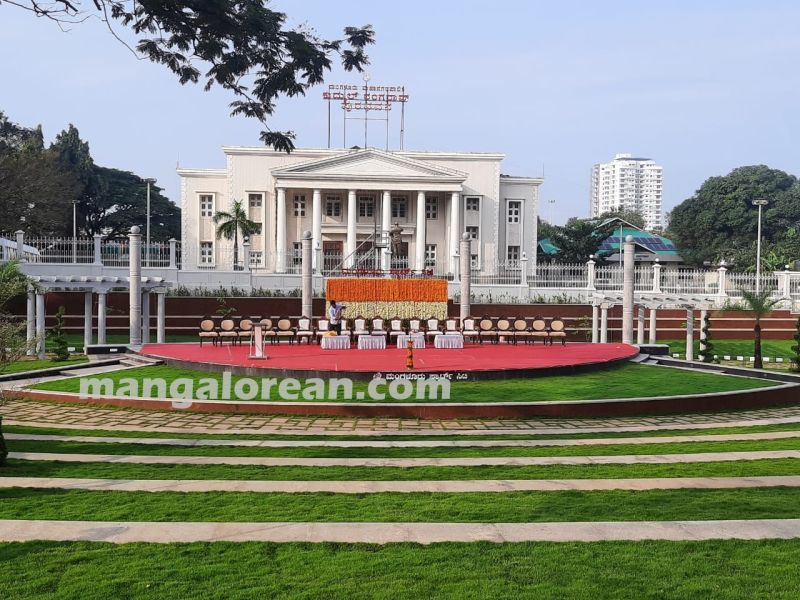 Key features of the underpass include multiple entry or exit points on either side of the road, access paired with a staircase and ramp for the physically challenged, renovation of Gandhi Park into a plaza, generating commercial potential by dedicating spaces for kiosks within the plaza, and provision of space for commercial advertising and murals depicting city heritage along the underpass walls. With the first phase of the underpass to cross the Nehru Maidan Road near the Mini Vidhana Soudha was getting completed, Mangaluru Smart City Limited (MSCL) took up the second phase of work.

In the second phase, the underpass was extended further, for the pedestrians to cross the Rao and Rao Circle-Clock Tower Road stretch. Those who enter the pedestrian underpass from the entry point at Mini Vidhana Soudha may cross two roads now. In fact, the Ex-opposition leader in the council A C Vinayaraj had pointed out that the work on the second phase of the underpass is unscientific, and the height of the underpass is elevated five feet above the Rao and Rao Circle-Clock Tower road. He also pointed out that it will be difficult to construct an access point on the northern side of the road. He also blamed the MSCL, that the extension was not part of the original plan of the pedestrian underpass.

Former MCC Mayor Premanand Shetty, who was also the director of the MSCL had said that it was planned earlier but was not taken up due to the cost factor. “Initially, only one phase of work was taken up, considering the cost of the project, and later during the board meeting of the MSCL, it was decided to commence the second phase. The underground pedestrian crossing from the front side of the taluk office to Gandhi Park is 30 meters long and 10 meters wide. The 26-meter long and 10-meter wide underpass from Gandhi Park to Hotel Taj Mahal is now ready to use. 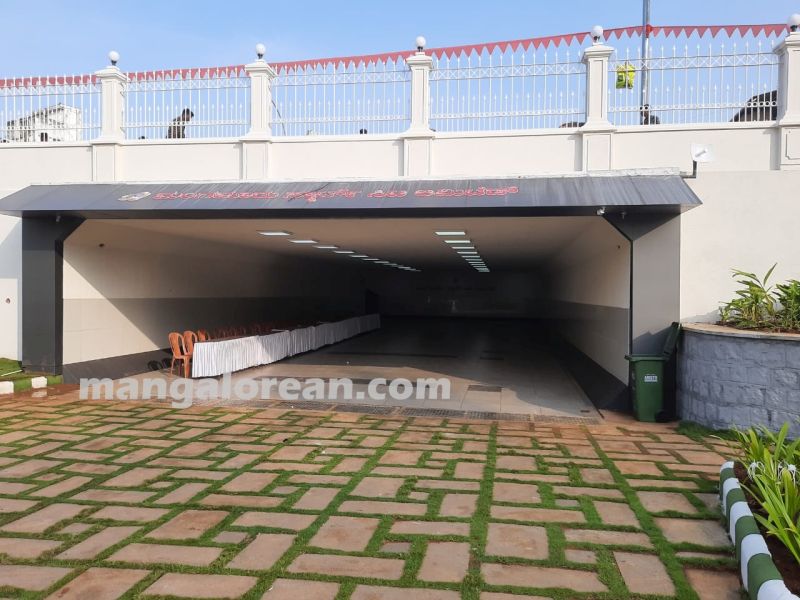 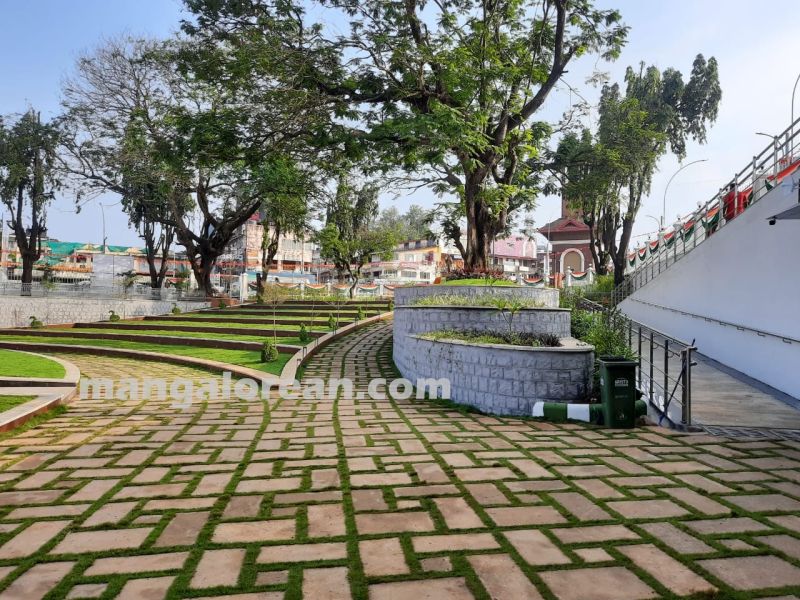 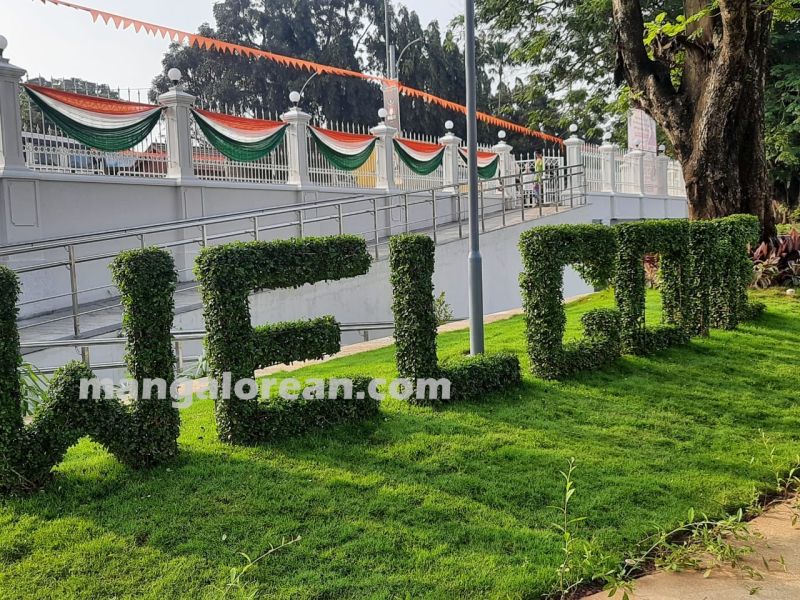 While the completion of work on this underpass has been going on for over two years, the public has widely criticized the slow pace of the project. Also, the Lockdown during Covid and monsoon season delayed the work.

This underground pedestrian crossing will be useful to thousands of passengers who arrive in the city from the railway station. Earlier, it was really risky to cross the road at this point, especially for women, children and senior citizens. Prior to this project, the demand to construct either a skywalk or underground pedestrian crossing had been planned for decades. Later during the Congress Rule, the skywalk project was formed and the foundation stone was also laid by the then district in-charge minister Ramanath Rai. However, the project never materialized due to the enormous cost.

Among the bunch of projects that had been criticized, where activists and citizens had raised their voices for the stupidity of the concerned officials of Mangaluru Smart City Ltd. and Mangaluru City Corporation, joined hand in hand with our MP and MLA, the ongoing project of Underpass near Town Hall was stated as a sheer waste of money. However, no one bothered either from MCC or MSCL, since the money utilized by them was the hard-earned money of the taxpayers, and not the concerned officials. 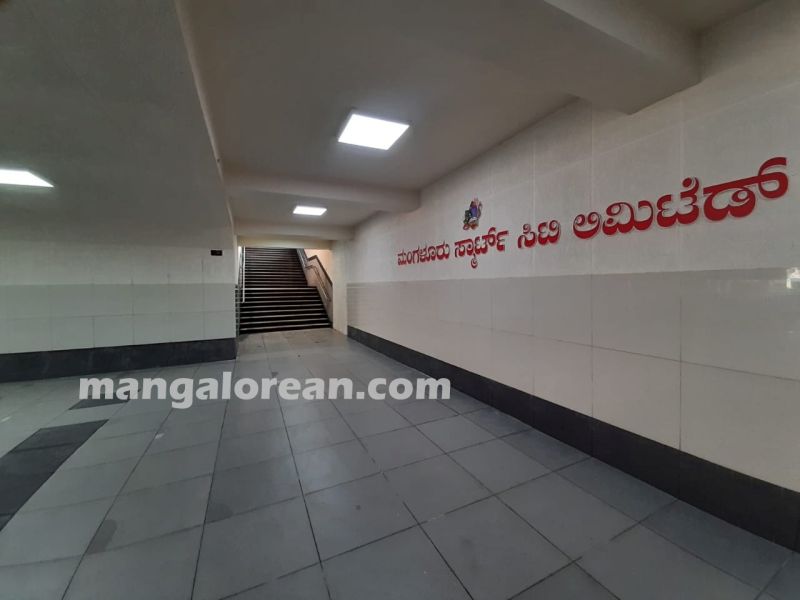 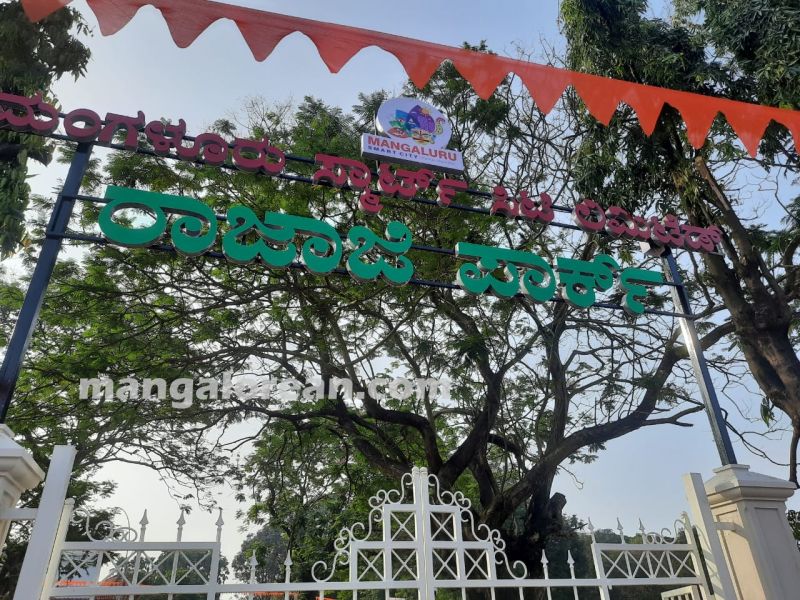 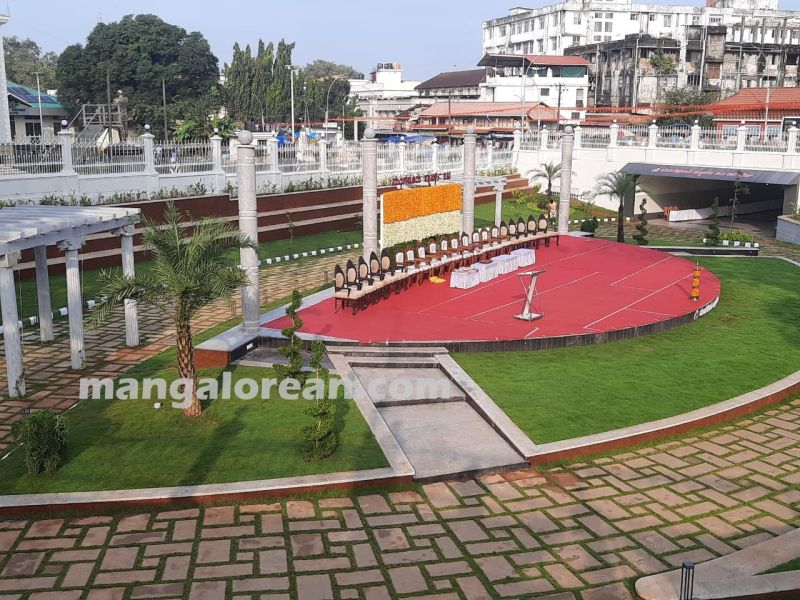 Among the unscientific and unplanned projects taken up by MSCL, this Underpass which is completed now seems like a waste of money, and now that it is open, it will be a haven for alcoholics, drug dealers and other illegal activities, if the lighting goes out of order. The present issue of Underpass was raised by a bunch of social activists, including Dilraj Alva-the former President of the Dakshina Kannada District Bus Owners Association who on his Facebook questioned the authorities on whether it was necessary to spend Rs 9 Crore on the construction of a pedestrian Underpass.

In his Facebook post, Dilraj Alva underscored the futility of building pedestrian Underpasses. He had said, “Is there one example of a pedestrian UnderPass that is useful? The answer is NO, because 99% of them are useless. And this Underpass is a perfect example, which will be out of use very soon. Dilraj speaking to Team Mangalorean further said, “It should be noted that most of the pedestrian Underpass often turn out to be used for illegal and immoral activities. This underpass near the Mangaluru Central Station so as to help passengers cross the busy thoroughfare and I am sure that, after the inauguration, the structure will become a safe haven for immoral activities, not to mention a breeding ground for mosquitoes, which is already happening “.

Dilraj further said, “On one hand, the new building to house the DC’s office is being constructed in Padil, in the outskirts of the City, where a bunch of trees were felled, and while the main bus stand is also being shifted from the City, thus creating nothing but more hassles. Traffic movement is expected to reduce as a result, making one wonder why Rs 9 crores were spent on this Underpass, which will be a useless and dumb project, rather than feeding the homeless and the needy.

And in spite of this underpass being put into use, there will hardly be any people using this Underpass, since they are used to footpaths and streets. And once it is dark, the underpass will surely turn into a Red Light Zone, benefitting the transgenders and the regular women. Oh well, that’s our Smart City managed by Officials who are not so Smart!