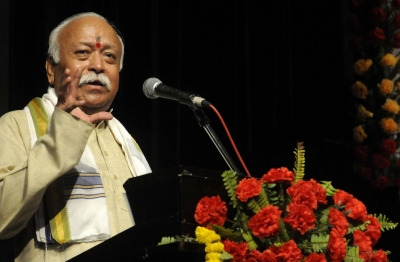 Nagpur: Sarsanghchalak of the Rashtriya Swayamsevak Sangh (RSS), Mohan Bhagwat, said on Friday that even in times of crisis, super powers like the US and China help other nations in a selfish manner, whereas it is the nature of India to help others selflessly.

Speaking at a programme organised by the Bharat Vikas Parishad here, Bhagwat pointed out that few countries, particularly China, used Sri Lanka and Pakistan for its selfish goals, but when they faced crisis recently, these countries did not come forward to bail them out.

During the recent economic crisis in Sri Lanka, India was the only country which went out of its way to stand like a rock in its darkest hour, he said.

“India not only rescued its medical students from Ukraine, but also safely brought back students from other countries. This is the character of India,” Bhagwat said, adding that charity is in the heart of Indian society.

The RSS supremo also said that countries that have been superpowers only dominated the world and fulfilled their vested interests, but India always lent a helping hand to the countries in distress.

India wants development and progress, but not at the cost of a world in strife, he said.

“India always takes the lead when it comes to helping those in desperate need of aid. India’s role in helping crisis-hit countries like Sri Lanka, Maldives and Ukraine is a shining example of that,” Bhagwat said, adding that other countries did not show such sense of belonging.