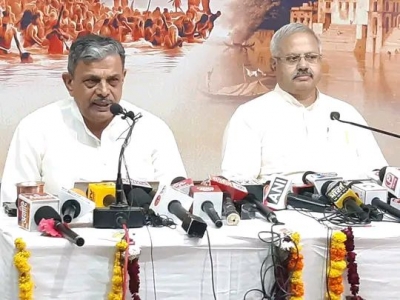 Prayagraj (Uttar Pradesh): The Rashtriya Swayamsevak Sangh (RSS) has underlined the need to evolve a policy for population control in the country.

Sarkaryavah Dattatreya Hosabale, while addressing a press conference at the conclusion of the four-day meeting of the Akhil Bhartiya Karyakari Mandal of the RSS on Wednesday, said, the population boom in the country was a matter of concern.

“This is especially important in view of limited resources in the country. Everyone must introspect on it and implement the policy for population control. There is a need to create awareness and awakening on the issue,” he said.

Hosabale further said that the population of Hindus was going down, mainly due to conversions taking place in the border areas.

“Population imbalance on religious basis has led to division of many nations. India had also faced a division because of this. Religion-based population balance was an important subject that could no longer be ignored. What kind of education and healthcare would be provided to the people if the population continued to grow?” he asked.

The four-day meeting also took stock of the expansion of the organisational work.

“We plan to have a ‘shakha’ in every division in the country by 2024. We have already achieved 99 per cent of the target. We have shakhas in places like Kerala too,” he said.

He also informed that the RSS would be completing 100 years in 2025 and therefore the meet would consider plans to expand the number of its shakhas across the country.