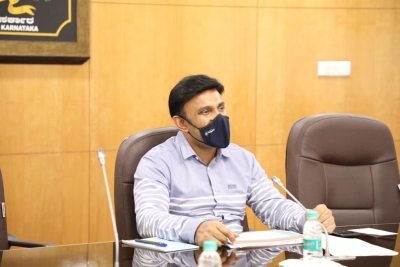 Bengaluru: With the resumption of passenger flights from the United Kingdom to India and the first flight to Bengaluru scheduled early on Sunday, Karnataka Health Minister K. Sudhakar said on Saturday that all UK returnees will have to undergo RT-PCR test on arrival, for which necessary arrangements are in place.

“The first flight from the UK will land at around 4 am on Sunday. According to airport officials, it will be a full flight with about 330 passengers. Even if they have a Covid negative report from there, they will again have to mandatorily undergo RT-PCR test on arrival,” said Sudhakar, who had gone to the Kempe Gowda International Airport to oversee the preparations.

He said all the necessary arrangements have been put in place by the airport and health department officials and passengers who disembark the plane will have to undergo another round of test which is a mandatory requirement.

“It will take three to four hours for the RT-PCR test reports to come. Once the report comes negative, they will be allowed to go out,” he said, adding that those who test positive will be shifted to designated hospitals for treatment.

India had suspended all passenger flights between the UK and India from December 23 to January 7 as a new variant of Covid-19 was discovered there.

The minister said that all the measures mentioned in the guidelines will be followed strictly and the officials have been given instructions in this regard.

He added that those who are found negative at the airport would be advised quarantine at home for 14 days and will be regularly followed up by the concerned state authorities.

Sudhakar further said that passengers coming from other countries should also carrying Covid negative report with mandatory RT-PCR test done 72 hours prior to the start of their journey.

“Those carrying certificates will be allowed to go out after gathering the details of their stay. Those coming without a report will be tested,” he added.