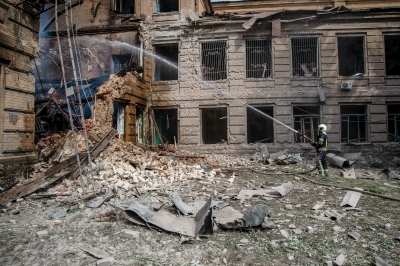 Russia launched 4,700 missiles on Ukraine since start of war

Ukrainian President Volodymyr Zelensky said that Russia has launched more than 4,700 missiles on his country since Moscow started its ongoing invasion against Kiev on February 24.

Kiev: Ukrainian President Volodymyr Zelensky said that Russia has launched more than 4,700 missiles on his country since Moscow started its ongoing invasion against Kiev on February 24.

In a video address on Sunday, the President said: “Russia has used more than 4,700 missiles in 270 days of the full-scale war. Hundreds of our cities are simply burned.

“Thousands of people died. Hundreds of thousands were forcibly deported to Russia. Millions left Ukraine for other countries fleeing war.”

He also said that more than 20 million people were left without electricity on November 8 when Russia carried out over a 100 missile strikes in what is believed to be Moscow’s biggest wave of missile strikes since the invasion began, Ukrayinska Pravda reported.

“Do you know what this missile strike is? It’s more than 20 million people without electricity. Such was the damage to the power system, such was the urgent emergency blackout.

“The reactors at two of our nuclear power plants also shut down due to the damage to the energy sector caused by the missile,” he was quoted as saying.

Russian attacks have damaged almost half of Ukraine’s energy system and millions of people are without power as temperatures drop for winter.

Blackouts, both scheduled and unscheduled, have become common in many parts of Ukraine, as Russia aims regular waves of missile attacks at parts of the energy infrastructure.