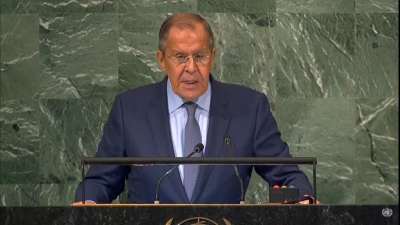 “Yesterday, Volodymyr Zelensky called on his Western handlers to take a pre-emptive nuclear strike against Russia. This character actually gave the world further evidence of the threat emanating from the Kiev regime. It is to neutralise that very threat that the special military operation was launched,” said the Minister while speaking at the fourth meeting of the United Russia Party General Council Commission for International Cooperation and Support for Compatriots Abroad, Moscow on October 7.

“His ‘soul friends’ in Poland recently reaffirmed that they had the same dreams of acquiring nuclear weapons. So far, at this stage, Warsaw wants to join NATO’s practice of conducting joint nuclear missions, which grossly violate the requirements of the Non-Proliferation Treaty,” said the Minister.

“What about NATO? In addition to its lies and threats against us, the alliance, together with the EU, continues to reiterate its all-out support for Zelensky, who is at the forefront of Ukraine’s struggle for European values, freedom and democracy,” he said.

“As has been repeatedly explained, Russia’s Military Doctrine and the Fundamentals of State Policy on Nuclear Deterrence remain unchanged. Any attempts by Washington or its vessels to distort this reality or our approach are aimed at intimidating the international community, forcing its sensible part to follow the failed path of reckless support for Kiev in all its crazy schemes,” he added.

“The European Political Community, proposed by French President Emmanuel Macron, held its inaugural summit on Thursday. Head of EU diplomacy Josep Borrell proudly stated in its wake that the process of forming a security structure has been launched without Russia. They are dancing to Kiev’s tune and encouraging the insane fantasies of the people who are still in power there. The US and its allies are taking on enormous responsibility for the dangerous ratcheting up of international tensions, pumping weapons into Vladimir Zelensky’s Ukraine despite his openly proclaimed nuclear ambitions,” said the Minister.

“As you remember, French President Emmanuel Macron once diagnosed the North Atlantic Alliance with ‘brain death’. Judging by the way NATO is nurturing the neo-Nazi regime in Kiev, this ‘disease’ has gone too far,” the Minister added.

Once again, we warn the US and other sponsors of the Kiev regime against deeper involvement in the situation as parties to the conflict, he said.