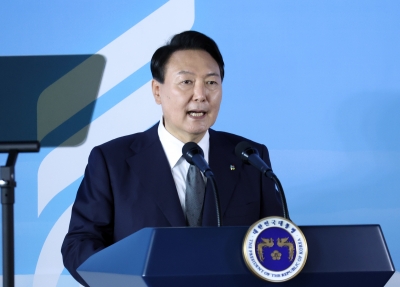 Seoul: South Korean President Yoon Suk-yeol on Sunday announced a period of national mourning and ordered the lowering of flags after a deadly stampede killed at least 151 people, including 19 foreigners, during Halloween celebrations in Seoul.

Yoon addressed the nation live from the presidential office a day after a crowd surge in a narrow alley in Itaewon crushed scores of young revellers, many in their 20s.

“As president, who is responsible for the people’s lives and safety, my heart is heavy and I struggle to cope with my grief,” he added.

“The government will designate the period from today until the accident is brought under control as a period of national mourning and will place top priority in administrative affairs in recovery and follow-up measures.”

Yoon expressed his condolences over the deaths and wished a speedy recovery for the injured, saying the government will support funeral preparations and fully mobilise emergency medical services to treat patients, including by assigning public servants individually to those requiring assistance, Yonhap news agency reported.

“The most important thing is to determine the cause of the accident and prevent similar accidents,” he said.

“We will thoroughly investigate the cause of the accident and make fundamental improvements so that similar accidents do not happen again in the future.”

Yoon also added that he will instruct the Interior Ministry and other relevant ministries to carry out an emergency review of all Halloween celebrations and other local festivals to ensure they are conducted in an orderly and safely manner.

Immediately after the address, the President visited the site of the accident before heading to the government complex in central Seoul to preside over a government response meeting.

He also ordered all government offices to lower their flags to half-mast, according to his office.