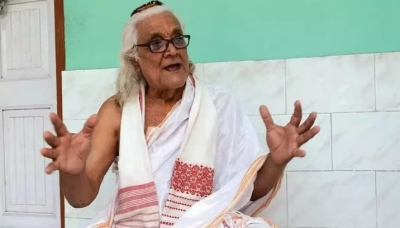 Guwahati: Eminent Sattriya proponent of Assam and the Burha Sattriya of the Barpeta Satra in the state, Basistha Dev Sharma passed away on Saturday.

He was critically ill for some time now and was under medical supervision at Guwahati Medical College and Hospital (GMCH). According to a medical bulletin of the hospital, he succumbed to his illness at 4.56 p.m. on Saturday.

Dev Sharma was undergoing intensive treatment for the last few days under the care of medical experts at the hospital.

Due to his death, the cultural spectrum of Assam would face a major loss.

He was born in 1938. Dev Sharma contributed immensely to the promotion of Sattriya dance, music, and the folk culture of Assam.

In 2017, the Sattriya maestro was selected for the national-level Srimanta Sankardev Award by the state government.

Following his continuously deteriorating health for the last few days, the people of Barpeta organised an earthen lamp lighting ceremony and offered their prayers for Dev Sharma’s recovery.

Chief Minister Himanta Biswa Sarma condoled his death and said that Basistha Dev Sarma left an invaluable contribution to the spiritual and cultural life of Assam.

He added that an ardent follower of Srimanta Sankardeva and Sri Madhabdeva, Dev Sarma dedicated his life to the promotion of Sattriya culture.

Many other eminent personalities of Assam have offered their condolences.