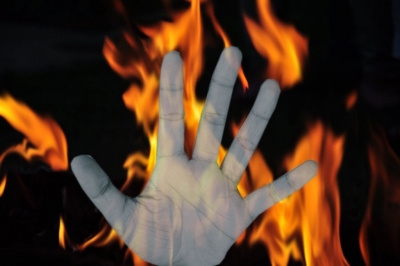 Ranchi: A class IX student of Jamshedpur’s Saradamoni Girls’ School, Ritu Mukhi, set herself on fire by sprinkling kerosene on her body after returning home from school on October 14. She passed away on October 21, after struggling for seven days in Tata Main Hospital with 90 per cent burns.

The 14-year-old is survived by her mother, Saraswati Mukhi and her siblings. She was calm and introverted by nature and wanted to become a government officer to support her family. Her family’s hopes and dreams also came to an end with her death.

On October 14, when her mother and brother were out for some work, she sent her sisters to a neighbour’s house before setting herself on fire. When the flames intensified, she ran towards the street and fell unconscious. Hearing the commotion, people nearby ran to her aid and doused the fire.

The reason behind this drastic step is extremely shocking. In the statement given to the police, she said that she was appearing for her terminal exam when the invigilator, Chandra Das, accused her of cheating. Das slapped her and forced her to remove her clothes in front of everyone to check for hidden notes even after she protested.

The victim added in her statement that she was so embarrassed by the incident that she took the extreme step after returning home from school that day.

Das is lodged in jail and has denied the allegations, although several other students who were present in the class confirm the victim’s allegations. School principal Geeta Mahato has been suspended. Taking cognizance of the incident, Chief Minister Hemant Soren directed the administration to take necessary action.

When Jamshedpur Deputy Commissioner Vijaya Jadhav reached to console the victim’s mother, the latter kept saying that she couldn’t save her baby girl. She also requested Jadhav to get justice for her daughter.

This incident raises many questions about the system. Dr S.C. Sharma, a retired lecturer and academician of Vinoba Bhave University, Hazaribagh, says that, “This incident may at first glance seem to be only the teacher’s fault, but in reality it is a question on the entire educational system and our social fabric as well.”

He added that, “the student took the decision while suffering herself and did not let anyone get a hint about the ‘war’ in her mind. Such reports are coming frequently from academic campuses. We move on after every incident with only regret and blame. Incidents of corporal punishment are a question on the whole system. Merely making laws to stop them will not work. There is a need for constant counselling of teachers-students-parents.”

In Jharkhand alone, there have been many incidents of harassment of students in schools in recent times. On September 27, Vikas alias Cyril Kujur, a teacher of St. Michael English Medium School of Gumla district, brutally thrashed 13 students when they refused to dance. Many students were injured and had swollen hands and feet.

Angered by this incident, people staged a sit-in in front of the school and protested. Eventually the accused teacher was sent to jail by registering an FIR.

A similar incident happened in Bokaro on September 22. In SS High School of Kasmar block, school teacher Vineet Kumar Jha thrashed a student, Rajkumar Mahato, badly. The student suffered a serious injury on his hand. In protest, students and parents blocked the main road outside the school and demanded action against the accused teacher. Later, the police pacified them by assuring of strict action.

On September 9, at a private school in Deoghar, a minor student of Class IX was allegedly thrashed and made to stand in the sun for three hours by a non-teaching staff, causing him to faint. He was rushed to his house, from where his family members admitted him to a hospital.

Two teachers of Modern English School in Itki block of Ranchi district brutally thrashed a sibling duo, resulting in injury marks on their bodies. Their father lodged an FIR at Itki police station on October 14.

Renu Tiwari, who was in charge of the primary section of a reputed school in Ranchi for almost three decades, says that, “along with the teachers, students and parents should be constantly counselled. Corporal punishment for children in school or any kind of discrimination against them comes under the category of crime.”

It is the responsibility of the school management to create an environment where children can feel safe. There can be many ways to control the indiscipline of the students. For example, complaints should be made to the parents and an undertaking should be given in serious matters. Corporal punishment is by no means a solution to the problem, Tiwari added.