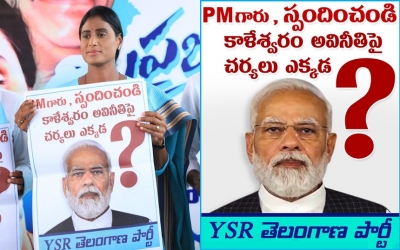 Sharmila writes to PM on corruption in Kaleshwaram project

On the eve of Modi’s visit to Ramagundam to inaugurate fertilizer plant, YSRTP has launched a poster campaign to bring the issue to his notice. The posters have come up across Ramagundam, Godavarikhani, and in the surrounding villages.

During her ongoing padyatra, Sharmila released the poster and wrote to PM Modi.

“On the occasion of the Prime Minister’s visit to Telangana, YSR Telangana Party has written to him seeking immediate investigation into what is supposed to be the biggest irrigation-related scam in the country, the Kaleshwaram Project scam. I have put forward a strong plea, requesting him to act on this issue in the larger interest of the farmers of Telangana,” she said.

Sharmila expressed disappointment that though her party has been fighting hard against KCR and his contractor’s gains in the project, massive irregularities, falsification and inflation and embezzlement, besides compromising on standards and quality that led to a massive damage, Ano action has been taken till date. “We have lodged complaints with CBI and CAG, supported by strong evidence and documents that establish corruption. Even, the central ministers, whenever they visit Telangana, point to the corruption in the project, but have never initiated any action, till date, which is nothing but lip service. It is my request to the Prime Minister to not just stop with allegations, like his cabinet colleagues, but act in the interest of the Telangana population, and the farmers in particular,” added Sharmila.

The YSRTP leader alleged that the framers of the drought-ridden and parched lands of Telangana have been backstabbed by KCR where the project cost was increased to 1.20 lakh crores, from Rs 40000 crore, while no extra acreage was shown. “This has robbed the state exchequer and farmers are at an irrevocable loss. We hope the Government of India initiates investigation after taking note of these shocking facts, that truly make this a national scam. We should not forget that close to one lakh crores of rupees have been dispersed by Central PSUs and funding agencies.”