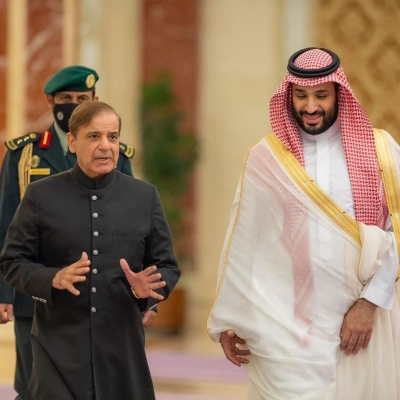 Islamabad: Pakistan Prime Minister Shehbaz Sharif is set to embark on a two-day visit to Saudi Arabia starting from Monday to attend the “Davos in the desert” summit — an initiative of Saudi Crown Prince Mohammad bin Salman to expand the Kingdom’s role beyond oil in the global economy.

Hundreds of delegates from around the world including government officials, business leaders and even CEOs of American companies are attending the two-day Future Investment Initiative summit in Riyadh. The conference will kick off on Tuesday, The Express Tribune reported.

Official sources confirmed that the Prime Minister is visiting Saudi Arabia on the invitation of Crown Prince.

He will attend the two-day conference and is scheduled to meet the Saudi leadership, Express Tribune reported.

The Davos in the desert is taking place at a time when Saudi Arabia and the US clashed over Riyadh’s move to cut oil supplies despite request by President Joe Biden to the contrary.

US officials have not not invited to the investment summit, according to the organisers.

However, 400 CEOs from different American companies will be in attendance. A strong Chinese delegation will be in Riyadh highlighting Saudi Arabia’s push to diversify its options and look beyond the West.

Pakistan considers the conference as an opportunity to draw world’s attention towards the climate-induced floods.

Meanwhile, the Saudi Crown Prince is expected to travel to Islamabad next month on a crucial visit Pakistan is hoping will lead to yet another financial bailout package from the oil-rich Arab nation.

Though officials are tight-lipped and not sharing details of the visit, sources confirmed to The Express Tribune that the two countries were in touch to prepare for the visit.