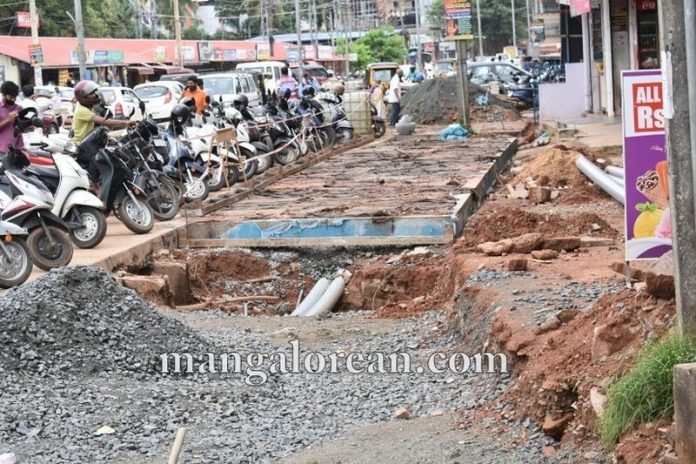 Mangaluru: No wonder some people term MCC (Mangaluru City Corporation) as ‘Mangaluru Corrupt Centre’- for the fact for all the corruption/bribing etc that takes place in the building between some of the corrupt officials when it comes to Town Planning Projects or in issuing licences without inspection- all for exchange of BIG moolah aka MONEY! With several illegal constructions being seen in Mangaluru, and MCC has turned a blind eye against them, and such illegal constructions still continue, until they are caught red-handed or when such constructions come in the way of development works of MCC or Mangaluru Smart City Ltd (MSCL). 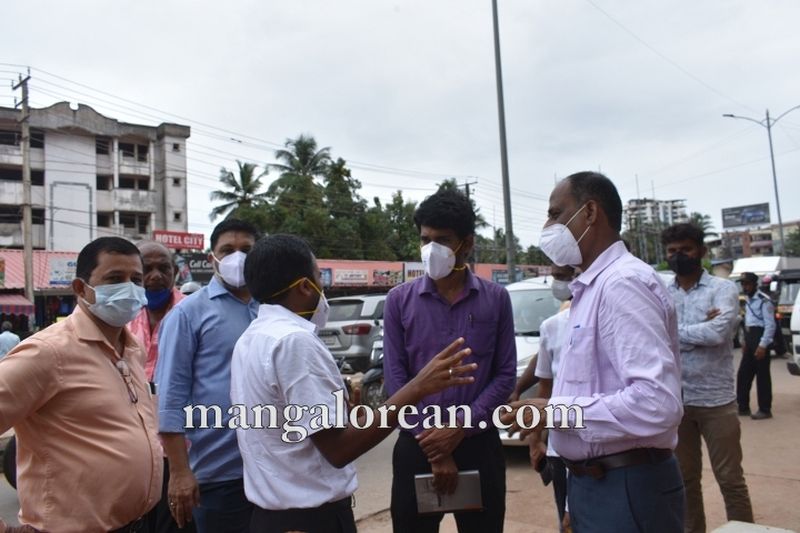 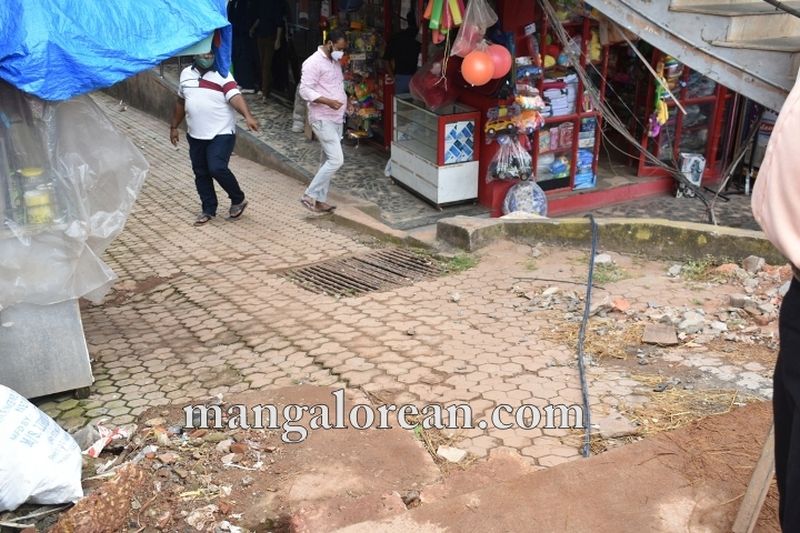 And one such example of illegal construction of shops constructed decades ago was by the building owner of SHALIMAR COMPLEX, located opposite Kankanady Market in the City. And such illegal construction came to light when MCC was in the process of developmental works of footpath cum drainage/UGD in that vicinity. And while the work was going on these illegal shops built on the encroached City property had to be demolished, after notice being sent to the building owner. 5-6 Shops built by building owner of ‘SHALIMAR’ on the encroached property of City were demolished by Mangaluru City Corporation (MCC) to make way for Footpath/Drainage While the shop owners have to suffer the loss of income after their shops were demolished, the officials from the Town Planning dept of MCC made BIG bucks in granting licences to the building owner years ago, and the building owner made BIG money through rents from these shops. What corrupt society are we living in? And to control such illegal activity, the FORMATION OF WARD COMMITTEE & AREA SABHAS is REQUIRED, which has been delayed by the MCC OFFICIALS, INCLUDING THE COMMISSIONER, and there is an assurance that the ward committee will be formed by July 2021 end. Hope so?

In a press release to media, RTI and Social Activist Gerard Towers has mentioned, “Dear Media friends, This is the building, named SHALIMAR COMPLEX, situated at KANKANADY junction, opposite Kankanady Market, besides GANESH MEDICALS, which was caught by MCC authority, for ENCROACHING public ROAD, after receiving COMPLAINT on SOCIAL MEDIA couple of months back and the OWNERS were made to remove the unauthorized part of CONSTRUCTION which was there from more than 10 years. This construction happened hand in glove with the Corporator and the Town planning Dept etc. by offering BRIBE.

Now SURPRISINGLY, once again the DEMOLISHED PART has been rebuilt with the shops that were demolished couple of months ago, during the recent lockdown and it’s a known fact that, this is ONCE again done, with the knowledge of the MCC authority. This CLEARLY INDICATES that RICH BUILDERS are allowed to do any VIOLATION against the MCC RULES and only the POOR STREET VENDORS are punished throughout the YEAR. Apart from that with Mangaluru City Corporation taking up the road widening on this stretch of Kankanady road (opposite to the Market/front of Shalimar Complex) has put many businesses in hardships and inconveniences, due to the slow work. 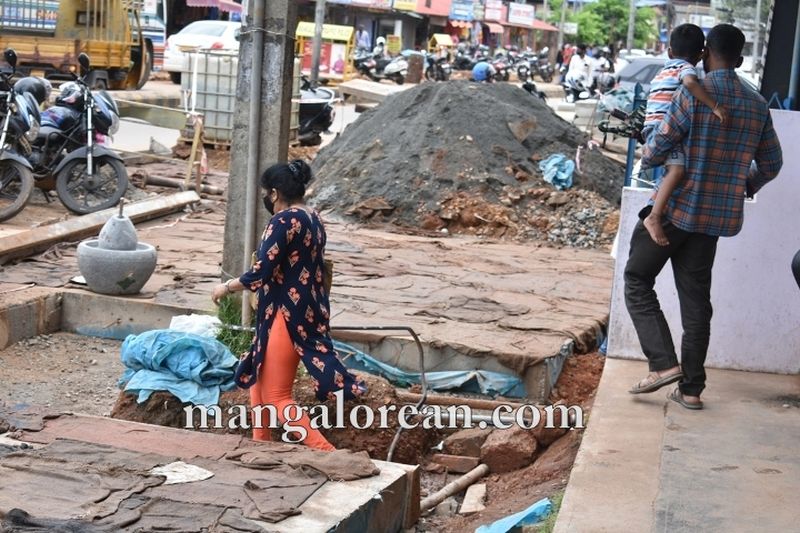 With heavy rains lashing the city a few weeks ago, and also that with the lockdown kicking in a couple of months ago, where many labourers went back home, resulted in the slow progress of the construction work, and also it was left incomplete. And when heavy rains lashed that area, rainwater gushed into many shops which were in the lower area and incurred heavy losses, but even after many complaints, everyone turned a blind eye to their woes. And with all the mess and no proper parking available due to the ongoing road work, the business has been very dull. Unable to bear with all the problems faced with the unscientific, incomplete, and slow work, the shop owners through their area ward corporator Naveen D’Souza had urged that MCC Commissioner to visit and see the shabby work done.

This morning (Wednesday 7 July) MCC Commissioner Akshy Sridhar along with other City officials made a spot visit and listened to the problems faced by the shop owners due to the unscientific and shabby road work, which has put them into huge problems. Some shop owners insisted that a ramp should be constructed soon since no vehicles could come in, for which the commissioner said that he will rectify the problem soon. Others had issues with the parking facilities which has resulted in low sales, with customers not able to find a suitable parking spot. Commissioner assured them that the issue will be solved soon and that the work will speed up. When Team Mangalorean pointed out about the electricity poles being not removed while the road widening was getting completed, Commissioner said that already electrical cables have been laid beneath the concreted road, and once the road work is completed, the electric poles will be lifted up using a crane. That sounds perfect, unlike other roads that we see where electric poles are left intact, while the new road construction is done. The Commissioner also visited the spot near Blasius D’Souza Road-Bendorewell, where MLA U T Khader had complained about a few shops blocking the road, leading to his residence. Commissioner assured Corporator Naveen D’Souza that the issue will be taken up during the next council meeting. If the construction is not legit it should be dealt with sternly. Officials must book wrong-doers and raze the illegal construction without any delay. After noticing quite a few constructions of shops/other businesses in the encroached property, many activists have complained to the MCC authorities, but no action has been taken. This is nothing but a hand-in-hand deal between the MCC Town Planning Officers and the builders. And the only way to stop such activities is to have Ward Committees in every 60 city Wards, but sadly the ward Committees are not formed since the MCC officials and corporators want to make money, the easy way.

The construction of unauthorized structures on unauthorized land is a serious problem that the government, including our City, is fighting against. Although various laws and demolition campaigns have helped to shed light on such activities, much more still needs to be done before such illegal acts are completely rid of this curse. Developers working on the construction of illegal buildings are responsible for putting financial and physical damage to investors and property buyers. Such structures are often made in violation of municipal codes and safety rules, and may include the use of faulty building materials, resulting in the demolition of buildings. In a developing city, about 30 to 60 percent of the population lives in settlements or unauthorized areas. The rise in the number of encroachments in the city shows the failure of the civic body to control the issue. As per an activist who is a civil engineer by profession says- Firstly, all the illegal encroachments must be razed immediately. Secondly, those indulging in illegal constructions must be fined heavily. They must also be prevented from indulging in construction work for a period of five years and they must be blacklisted so that potential buyers are aware. Thirdly, it is also important to ensure that proper awareness campaigns are held so that citizens are aware of the consequences of being involved in activities such an illegal construction and encroachments. It is the duty of both the civic body as well as citizens to ensure that such illegal activities are prevented in the city.

Land sharks in the city have not only been encroaching every piece of vacant land but are also undertaking the construction of illegal residential and commercial complexes and going to the extent of selling them to gullible buyers. Due to the laxity of officials, illegal constructions on such encroached lands is a menace that is growing by the day. In order to put an end to this menace, MCC should set up a special cell that will monitor areas by undertaking intense checks of every area in the city periodically and take immediate steps to demolish illegal structures coming up. Sadly, for which such a cell does not exist at the moment. For this, the officials must be vested with powers to construct boundary walls on all sides of a vulnerable property to prevent encroachment and issue legal notices to concerned parties. However powerful and influential the encroacher may be, strict action must be initiated against the guilty. This is the only way to deter wrongdoers from encroaching vacant and access roads.

Now that we have an experienced Mayor Premanand Shetty, in whom the Citizens have full faith in the developmental works in the City, and who has assured on the day he took charge as MCC Mayor that he will see that developmental works are done smoothly and systematically, let us all keep our fingers crossed and see whether he practices what he has preached? In the meantime, we all know that CORRUPTION will not STOP in MCC, no matter what! Hope the MCC Commissioner Akshy Sridhar and Mayor Premanand Shetty will look into this ongoing road work project on this stretch of Kankanady Road and save these shop owners from facing more losses due to negligence, slow and unscientific road work undertaken by MCC.