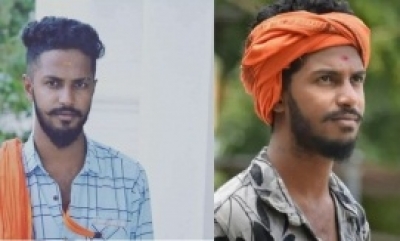 Shivamogga: Slain Bajrang Dal activist Harsha’s family has asked the police for protection from anti-social elements, who were giving life threats to them in Karnataka’s Shivamogga district.

Ashwini, Harsha’s sister, said on Tuesday that the bike-borne miscreants, who killed her brother, would not spare his friends as well.

A group of nine persons wielding weapons created ruckus and gave life threats to Harsha’s family members late Monday evening. They also assaulted a person, whose brother was involved with the Hindu organisations.

“The authorities should protect our family. We had lost Harsha eight months ago. There have been many stabbing incidents reported in the region since then,” she said.

The BJP is ruling at the Centre and in the state. Shivamogga Assembly constituency is represented by the BJP, she added.

“But, when will we get protection? Harsha was targeted and killed. He was killed because of his association with the Hindu organisations and Hindutva work. If he is killed, where is the protection for us?” Ashwini asked.

Meanwhile, BJP MLA and former Minister K.S. Eshwarappa said that the incident was a failure of the police department. He also chided that the Congress and other parties were silent over the incident.

“This emboldens them and makes them think that they are supported by the Congress,” he added.

“The goondas should be tamed by their community elders, leaders and religious heads. Not all Muslims are into this. A few are attempting to destroy the harmony and they should be effectively dealt with.”

The former Minister also said that Harsha’s sister and family members were like his own family and all protection would be ensured to them.

Eshwarappa represents the Shivamogga Assembly constituency. The Hindu organisations and activists are demanding that the ticket for Shivamogga constituency must be given to Harsha’s sister.

The former BJP Minister added that he will abide by the party’s decision.