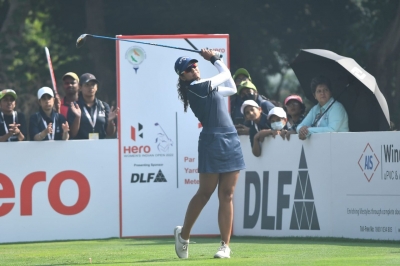 Solid display by home players in the Women’s Indian Open

Gurugram: Amandeep Drall’s tied second place at the US$400,000 Hero Women’s Indian Open was the icing on the cake in a week that saw a very strong display by the home contingent.

Amandeep was in contention till late on Sunday but finally finished with scores of 67, 72, 76 and 72.

“Today, I wouldn’t say it was a bad round. Level par on this DLF course is always a very good score especially when I was playing in the leader group for the very first time. My front nine was better and on the back nine, I missed two short birdie putts on the 12th and 13th. Yet, overall I was very happy with the way I played over the four days.”

Aditi said, “Not a bad result overall but I was hoping for better. This is not an easy course but I also missed a lot of birdies throughout the week. The 18th hole bogey was disappointing.” Aditi had a bogey on a Par-5 in both the third and final rounds.

Vani Kapoor (72-71-73-69) was the fourth Indian in the top 10, sharing the eighth place with a three-under 285. “I am glad I was able to make some ground today in the final round. This result should push me up the Order of Merit also,” said Kapoor, who played and made the cut in her tenth start at the Women’s Indian Open.

Both Vani and Gaurika are regulars at the DLF Golf and Country Club, the venue of the Hero Women’s Indian Open.

Avani Prashanth won the amateurs’ plate with a one-under 287 aggregate (75-76-69-67) ahead of US-based Anika Varma and Mysore’s Vidhatri Urs.